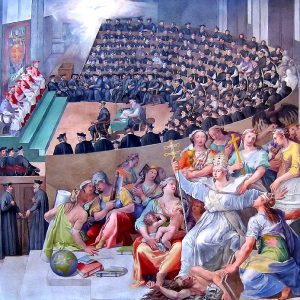 The Counter Reformation was a period of spiritual, moral and intellectual revival which the Catholic Church engaged with in response to the Protest Reformation. Sometimes called the Catholic Revival or Catholic Reformation, this movement began in 1545 during the start of the Council of Trent and ended in 1648 during the end of the Thirty Years’ War.

The Roots of the Catholic Reformation

During the 14th century, the Catholic Church became affected by the increasingly secular culture that defined the Renaissance Era. To promote the preaching of the gospel and encourage people to return to Catholic morality, the Church reformed many of its religious orders including the Benedictines, Cistercians and Franciscans. However, many deep seated problems that threatened the very structure of the Church still existed.

In 1512, the Fifth Lateran Council initiated a series of reforms for secular priests. These priests were clergy who were part of a regular diocese rather than a religious order. The council resulted in one highly influential convert, Alexander Farnese, the cardinal who would become Pope Paul III in 1534.

Before the Fifth Lateran Council, Cardinal Farnese had lived a compromised way of life. He kept a mistress for many years with whom he had four children. The council motivated him to change his way of life just before Martin Luther sparked the Protestant Reformation.

The Council of Trent

The Catholic world was shaken to the core in 1517 when Martin Luther wrote his 95 Theses. In response to the ensuing unrest, Pope Paul III convened the Council of Trent from 1545 to 1563. The purpose of the council was to defend major Catholic Faith doctrines that Luther and later protestants attacked. 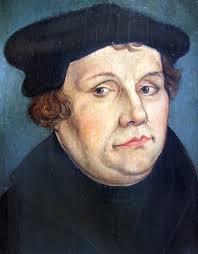 The council was also established to address many structural problems that existed within the Church. One such problem included popes like Cardinal Farnese who were notorious for their scandalous lifestyles and others such as those who came from the Medici Family of Florence. A significant number of bishops and priests had started to follow their negative precedents.

The Council of Trent introduced new intellectual and spiritual disciplines designed to help future generations of priests to live morally upright lives and not commit the same sins as their predecessors. These reforms shaped the modern seminary system which is still in practice today.

The council also put an end to the practice of appointing secular rulers as bishops as well as the sale of indulgences. Martin Luther had used the latter as a reason to attack the Church’s teachings about Purgatory.

The Council of Trent also resulted in the creation of a new catechism which clarified the teachings of the Catholic Church and called for reforms in mass. Pope Pius V who succeeded as pope three years after the council ended made these reforms in Catholic Mass. The Mass of Pope Pius V, known today as the Traditional Latin Mass, is thus considered one of the significant products of the Counter Reformation.

Aside from reforming existing religious orders and the products of the Council of Trent, the Catholic Reformation caused many new religious orders to emerge. The most famous of these orders was the Society of Jesus, commonly known today as the Jesuits. 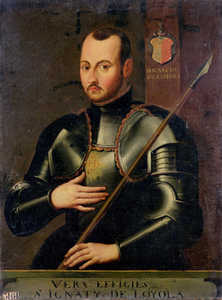 The Society of Jesus was founded by St. Ignatius Loyola and approved by Pope Paul III in 1540. The Jesuits practiced the traditional vows of poverty, chastity and obedience and also adopted a special vow of obedience to the pope which ensured their theological orthodoxy.

The Jesuits quickly became an influential order and a powerful religious and intellectual force, founding many seminaries, schools and universities around the world. They were also responsible for paving the way for missionary work beyond Europe, particularly in Asia, Canada, South America and the Upper Midwest of the United States.

Established in 1542, the Roman Inquisition became the chief enforcer of Catholic doctrine during the Counter Reformation. The Italian Jesuit and cardinal St. Robert Bellarmine was a key figure in the Inquisition. His significant contributions include his efforts to reconcile Galileo’s scientific views and the Church’s teachings and his role in the trial of Giordano Bruno.

The Counter Reformation also shaped the political climate of the times. One major political charged incident was the sinking of the Spanish Armada in 1588 which was the response of Protestant Queen Elizabeth I against Philip II, the Catholic King of Spain, who plotted to aggressively reinstate the Catholic religion in England. The rise of Protestantism was also directly tied to the rise of the nation states.

Important Figures of the Catholic Reformation

Many people shaped the course of the Catholic Reformation. Some of the most important figures of this time include St. Charles Borromeo, St. Francis de Sales, St. Teresa of Avila and St. John of the Cross. 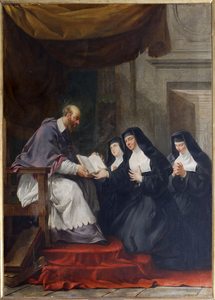 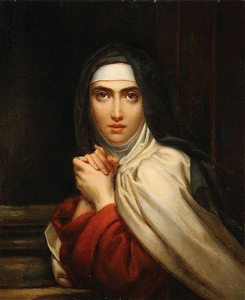 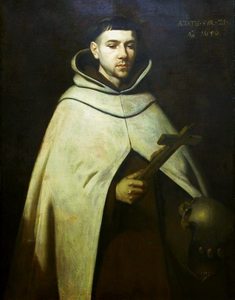 Saint John of the Cross

St. Charles Borromeo, the cardinal-archbishop of Milan, lived between 1538 to 1584. He founded seminaries and schools across Northern Italy and journeyed throughout the area to visit parishes and preach. He also inspired priests under his authority to stay committed to a life of holiness.

St. Francis de Sales was the bishop of Geneva who lived between 1567 to 1622. By living out the principle of “preaching the Truth in charity,” he was able to win back many Calvinists and get them back to the Catholic Faith. His efforts also focused on keeping Catholics faithful in the church by preaching and calling them to live a devout life. He encouraged people to make prayer, meditation and scripture reading a part of their daily lives.

St. Teresa of Avila and St. John of the Cross were both doctors of the Church who were responsible for reforming the Carmelite Order. They called Catholics to deeper prayer and genuine commitment to the will of God.