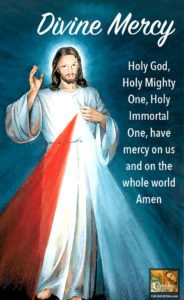 How awesome is God’s mercy! Only a God of Love would extend mercy to sinners like us.

Since the beginning of time, humans have ignored, disobeyed or turned cruelly against our Creator and Lord. Sometimes, these sins have happened right after God makes His presence known in a spectacular manner. Imagine being there when God parted the waters of the sea to offer your people a safe escape route, and yet a short while later, you are worshipping a golden calf! I think of myself as someone who wouldn’t do such a thing…Or would I?

I credited something to “luck” recently when clearly the credit should go to God. The examples of sin, in my own life, are sadly too numerous…

Awhile back my cell phone was missing. I didn’t realize it until we were all on our way out the door that morning. The kids had backpacks on their shoulders. I was putting a notebook in my bag. Then I remembered to ask, “Where’s the phone?”

So the phone wasn’t back at the gym. It wasn’t in the car. We checked the house. It wasn’t in any backpack or bag. I blamed Peter.

Brigit quietly spoke up. “Shouldn’t we pray to St. Anthony for help?”

I snapped, “We don’t have time!! I need to be at an interview in 30 minutes.” My voice was shaky. My eyebrows were furrowed.

Then I saw Brigit’s face. It must have been the same expression the angels had in that moment.

“Mom! Did you really just say you don’t have time for God’s help?”

I backtracked. We did pray. And as I opened my eyes, my gaze beheld the cell phone right in front of me on a bookshelf! And I felt humbled.

It brought a moment of clarity. I had just been disrespectful of the heavens. And yet, God still heard and helped a sinner like me.

I read once that St. Faustina’s confessor didn’t believe her visions so he told the saint he needed proof. He told her to ask God to enumerate his sins. If she could, then he would then know it was really Jesus she saw. The saint obliged.

“What are the sins of this priest, Lord?” she asked.

Of course it’s not really a matter of God’s memory. It’s a matter of mercy. If God kept in mind all our sins, the pile would be so huge, it would obscure the sun! Recently, I came home from a busy day and asked the kids to help pick up household clutter. Each child picked up two things while I was imagining they might do the dishes, put away laundry and pick up all the stuff dragged around by the puppy. But two things!!

I had a mad mom moment.

It took awhile before it occurred to me…much as the anger had justification it wasn’t getting the house clean. And it was creating bad feelings.

If God acted on “justified anger” over the horrors of sin, the earth would not have lasted long.

Our God is kind and merciful.

But He does not offer this great gift so we can be presumptuous. Rather we should be filled with humility and awe over such wondrous Love.

And this great Love calls us to offer mercy to others in return.