The Powerful Image of the Sacred Heart of Jesus

​What is the Sacred Heart of Jesus?

​When explaining the Sacred Heart of Jesus, as the age-old saying goes, “a picture is worth a thousand words.”

Jesus communicates with us in many ways — through prayer, through the Scriptures, and through images.

The Catholic religion abounds with symbols and imagery — from stained glass windows to statues of the holy family, the Rosary, and relics of the saints. These images serve as a visual reminder of our faith and represent messages Jesus is trying to communicate to us.

One of the most profound images Jesus uses to speak to us is the image of His Sacred Heart. Depicted throughout history in paintings, statues, jewelry, and prayer cards, The Sacred Heart of Jesus is the image of Jesus with His heart exposed, surrounded by thorns, with flames and a cross emerging from the top. In honor of the Feast of the Sacred Heart of Jesus, let’s take a closer look at what message Jesus is trying to convey to us in this striking image. How Did The Sacred Heart Image Come About? ​The devotion to the Sacred Heart of Jesus is believed to have started in the 11th century, but the devotion didn’t spread until Margaret Mary Alacoque, a French nun, began to receive multiple apparitions from Jesus starting in 1673.

On December 27, 1673, Jesus appeared to Margaret Mary for the first time when she was praying before the Blessed Sacrament. She described feeling herself, “wholly penetrated with that Divine Presence.”

Jesus spoke to her saying, “My Divine Heart is so inflamed with love for men and for thee in particular that, being unable any longer to contain within Itself the flames of Its burning charity, It needs to spread them abroad by thy means…” Jesus had chosen Margaret Mary to help fulfill His message: “I search for a victim of My Heart, someone who would want to sacrifice herself as an immolated host for the fulfillment of my designs.” ​​A few months after Jesus first appeared to Margaret Mary, He appeared a second time; during this apparition, He revealed to her ​His Sacred Heart​ in a moment she described as, “The Divine Heart was presented to me in a throne of flames, more resplendent than a sun, transparent as crystal, with this adorable wound. And it was surrounded with a crown of thorns, signifying the punctures made in it by our sins, and a cross above signifying that from the first instant of His Incarnation, that is, as soon as the Sacred Heart was formed, the cross was implanted into it and from the first moment it was filled with all the sorrow to be inflicted on it by the humiliations, poverty, pain, and scorn of His sacred humanity was to endure throughout His life and during His sacred passion.”

She continued to say, “And He (Jesus) made me see that He intensely desired to be loved by men and to snatch them from the path…onto which Satan was driving them in throngs…” ​​​When Jesus appeared to Margaret Mary a third time, she described Jesus “appearing to me resplendent with glory, with his five wounds shining like five suns, and flames issuing from every part of His sacred humanity. But above all, from His adorable breast which looked like a furnace; and uncovering his breast, He showed me His most loving and lovable heart, which was the living source of these flames.”

Jesus expressed to the nun His pure love for all humankind and the endless sacrifices He was willing to endure for our salvation. Yet, He also expressed with great sadness all of the ingratitude He received by so many. “Behold this heart which has so loved men that it has spared nothing, even to the point of spending itself and being consumed to prove its love to them. And in return, I receive from most men only ingratitude because of their irreverence and sacrileges and the coldness and scorn they have for me in this Sacrament of love. But what offends me most is that hearts consecrated to me act in this way. Do thou at least console me by supplying for their ingratitude, as far as thou art able?”

Jesus instructed her that for a period of time, she would endure turmoil and the devil would try to tempt her. He told her to receive Communion as often as she could, but especially on the first Friday of nine consecutive months.

​On this final apparition, Jesus revealed His final message to Margaret Mary and by extension, to all of us, that we are to celebrate the Feast of The Sacred Heart of Jesus every year on the Friday following Corpus Christi, in reparation for the coldness and indifference many have towards His infinite love and compassion.

​Jesus promises all who devote themselves to His Sacred Heart will receive many graces, especially:

​Margaret Mary died October 17th, 1690. Her desire to fulfill Jesus’ plan of establishing worldwide devotion to His Sacred Heart wouldn’t be fulfilled until many years after her death. In 1856 Pope Pius IX decreed that the feast should be regularly celebrated throughout the entire Church.

It’s been more than 150 years since the pope’s decree.

Are you devoted to Jesus’ Sacred Heart?

Let this year’s feast day (and every year going forward) be a reminder for all of us to replace ingratitude with gratitude for “the Heart which has so loved all that It has spared nothing, even going so far as to exhaust and consume Itself to prove Its love” to us. 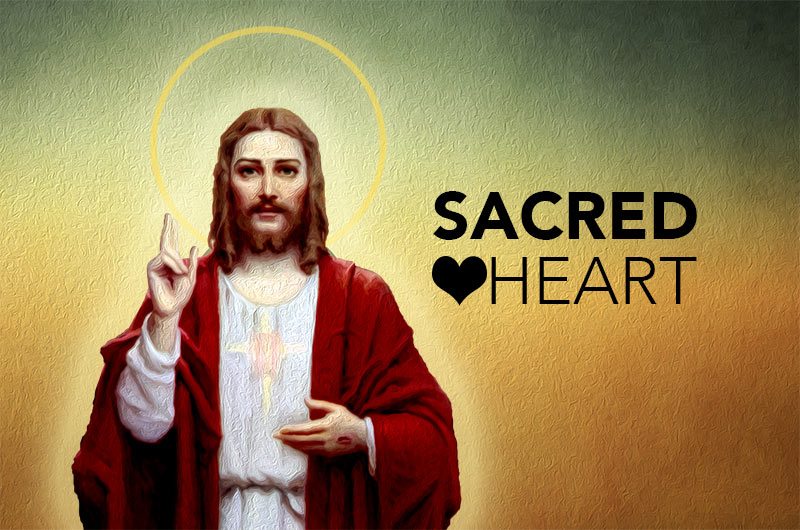