The Feast of the Archangels 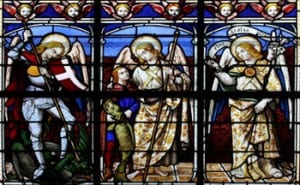 In my catechism classroom I tell my students to “leave room for your angels.” It’s a way to keep them from poking and annoying each other by sitting too close. But I also want to remind them that our angels are always with us, and they have an important role.

At the time, I didn’t realize the active involvement of the Archangels in the modern world.  Recently I’ve been reading about the appearances of Mary around the world. Did you know that angels are often there in these events as well?

At Fatima in 1916, the three children saw an “Angel of Peace” who taught them a prayer and announced that Mary was coming. What angel could this have been?  Michael of course!

In the Bible we know that Gabriel came as the messenger to Mary to tell her about the Incarnation. He came to Daniel as the “spirit of consolation, the Power of God.”

Archangel Raphael guided Tobias in the Old Testament and he is “the angel of health, of joy, of happy lovers and of safe travelers.”

But Michael is the strong one. As the defender of heaven’s gate he sent Satan down to hell in order to protect the world. It is believed that the children of Fatima may have seen the angel Michael who is also referred to as the Angel of Peace.

Praying to the Archangels

Gabriel – He offers comfort and guidance during times of difficulty. He offers a light in the darkness and is a source of hope.

Raphael – He brings healing in times of sickness. He helps couples and travelers.

Michael—He helps fight off the temptations of the devil. He is a guide to truth and peace of mind. He guards against heresy.

Pope Leo XIII was known as a Marian Pope and sat in the Chair of Peter from 1878 to 1903. He wrote 11 encyclicals about the rosary and approved two new scapulars to show his devotion to Our Lady.  He also found himself devoted to St. Michael.

It happened one day in 1884. The Pope had collapsed during a meeting after seeing a vision of devils multiplying and invading the world and would spread ruin during the 20th century. The only hope for relief from the horror of that image was that St. Michael was there fighting them. After seeing this vision, Pope Leo wrote the Prayer to St. Michael and asked that it be said at the end of all ordinary Masses throughout the Church.

It’s a powerful prayer and an important message for our times. We need St. Michael’s help to defend us against all the devil’s temptations. And during this election season, when tempers flare and we are pulled this way and that by “issue proponents”, St. Michael can be called on to help with clarity, that we might see and speak the truth with compassion. He is after all, the Angel of Peace both a warrior and an Angel of Peace.

Defend us in battle. Be our protection against the malice and snares of the devil. May God rebuke him we humbly pray; and do thou, O Prince of the Heavenly host, by the power of God, thrust into hell Satan and all evil spirits who wander through the world seeking the ruin of souls. Amen.

Make room for the angels in your life…may they protect us and guide us!