There are many Catholic symbols that we can use in our everyday lives to remind us of our faith. Some choose to wear religious items for this purpose and one of the most popular example is the four way medal and the five way medal. These devotional medals are beautiful proclamations of our devotion to God.

Let’s look into the history and meaning of these religious medals so we can better appreciate their significance to our spiritual journey here on earth.

The Four Way Medal or sometimes called the Five Way Medal combines four medals that are significant to our Catholic Faith. The Four Way Medal often comes in the form of a cruciform (cross shape) but there are variations like a diamond shape or a rounded shape. When we look closely at the medal, we see four (or five) well-known Catholic symbols that capture different elements of our faith. The following are the meaning of each symbol: The image of the Sacred Heart of Jesus shows Jesus pointing to His exposed heart which is crowned with a crown of thorns. This is a reminder of the great sacrifice that Christ made for us and His incomparable love. Another image depicts St. Joseph holding the baby Jesus and a lily. As the foster father of our savior, the image of St. Joseph represents guardianship and protection. The lily that he holds in his other hand is a symbol of purity and righteousness. The right side of the cruciform depicts St. Christopher moving through a stream of running water with the baby Jesus strapped to his back. This medal has three important meanings. First, as Christians, we must always carry the teachings of Jesus with us wherever we go and whatever we do. Second, we are called to give a helping hand to those who are in need. Last but not the least, we can ask St. Christopher can intercede for us if we are about to embark on a long journey. At the bottom of the cruciform we will see the miraculous medal. This medal is symbolic of the earliest Biblical prophecy of the Jewish messiah and depicts the Holy Mother standing on top of the world crushing a snake underfoot. There are many meanings attached to this imagery. First, Mary represents Jesus’ origins. Second, the world under her represents Jesus’ kingship over the world. Finally, the crushed snake reminds us how Jesus conquered evil. The center of the cruciform depicts a dove. The dove is a popular symbol of the Holy Spirit and baptism.

The Back of the Medal The back of the four way medal is often inscribed with the phrase, “I am a Catholic, please call a priest.” This is a way to tell others to call upon a priest in the event a wearer is involved in an emergency.

There is an image of Our Lady of Mount Carmel on the top of the back. When paired with the Sacred Heart on the front, this makes this medal a Scapular Medal as well.

On the bottom of the back, there is an image of the Miraculous symbol which includes:

History of Religious Medals and Jewelry

A religious medal is usually made of metallic material ad shaped in an oval, round or cross. They commonly depict religious images like an image of our Lord, the Holy Mother or a saint. These medals can also commemorate religious sites like shrines, spiritual events in one’s life like the first communion or an important historical event like an apparition of the Holy Mother. We usually wear religious pendants around our necks or attach them to a rosary or keychain so we can carry them wherever we go.

Medals are technically considered sacramentals or sacred symbols that bear resemblance to the sacraments. They symbolize effects, particularly spiritual effects, that are made possible through the intercession of the Church.

The wearing of religious medals has been practiced for a long time by people who are part of the Catholic Faith. Archaeologists have found a medal crafted in the 2nd century bearing the images of St. Peter and St. Paul and another one depicting St. Lawrence the Martyr which may have been crafted in the 4th century.

St. Zeno of Verona recorded a popular tradition of giving religious necklaces to newly baptized Christians as a way to mark their baptism and reception into the church. A story about the life of St. Genevieve also told how St. Germain placed a pendant impressed with a sign of the cross around her neck, a reminder of her vow of chastity.

In the Middle Ages, medals were given to pilgrims who visited religious sites like St. Peter’s Basilica in Rome. During the 13th century until the French Revolution, the jetons became popular. This type of medal was characterized by the initials of the wearer marked on one side while the other side contained a pious saying such as “Love God and Praise Him”or “Hail Mary, Mother of God.”

Love God and Praise Him

One of the most popular religious medals is the Four Way Medal which is unique for combining four separate medals into one, hence the name.

Do you wear a religious necklace? What is the significance of your medal to your Catholic Faith? 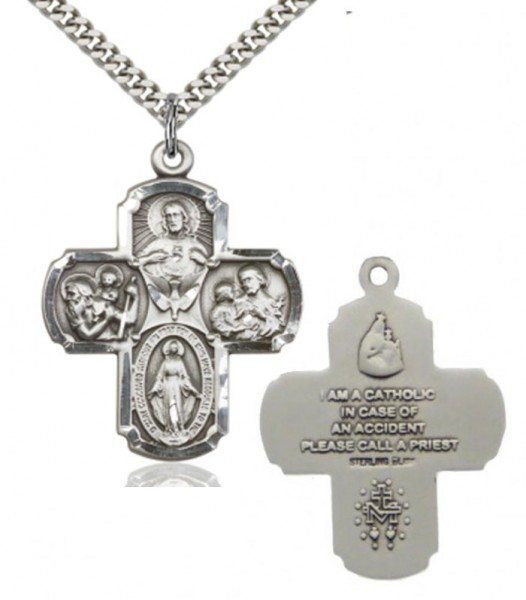 "Perfect design and style on this five-way medal. My husband really loves wearing it." 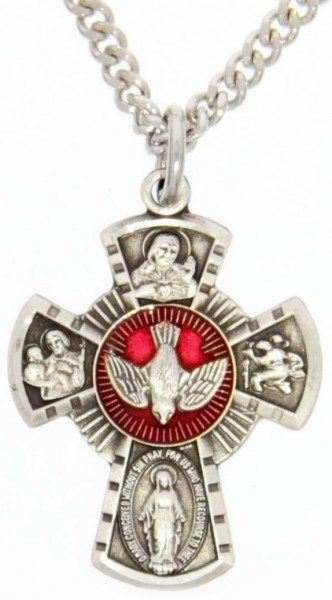 "My daughter loves and it looks great on her." "Just absolutely beautiful! Thanks so much for the excellent product and timely delivery! :)" 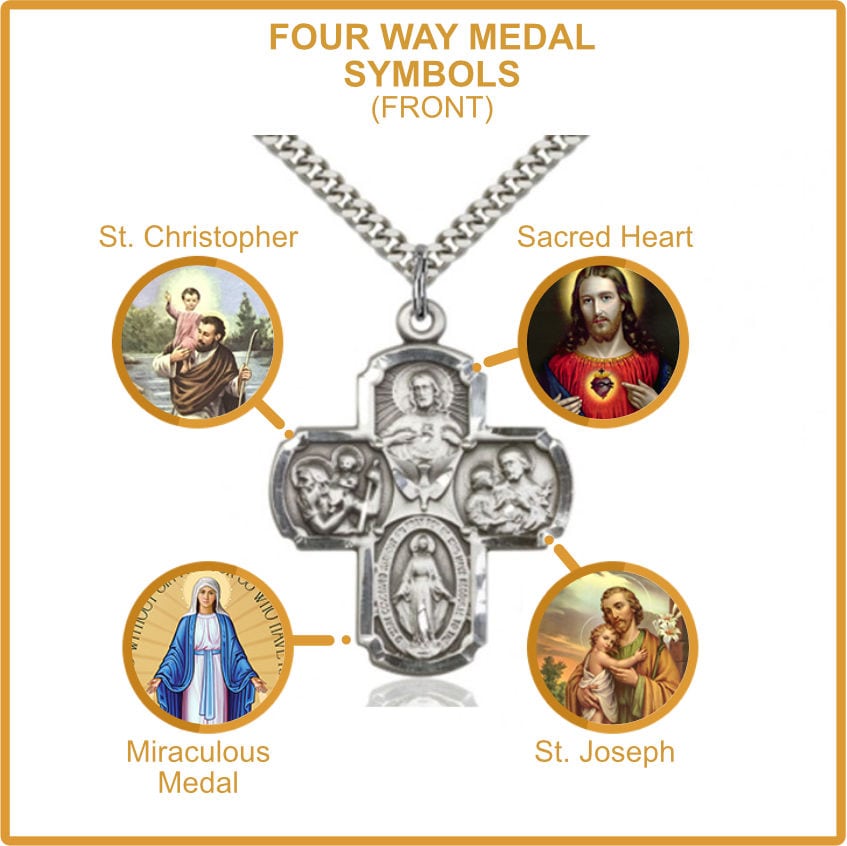