Origins and History of the Catholic Church 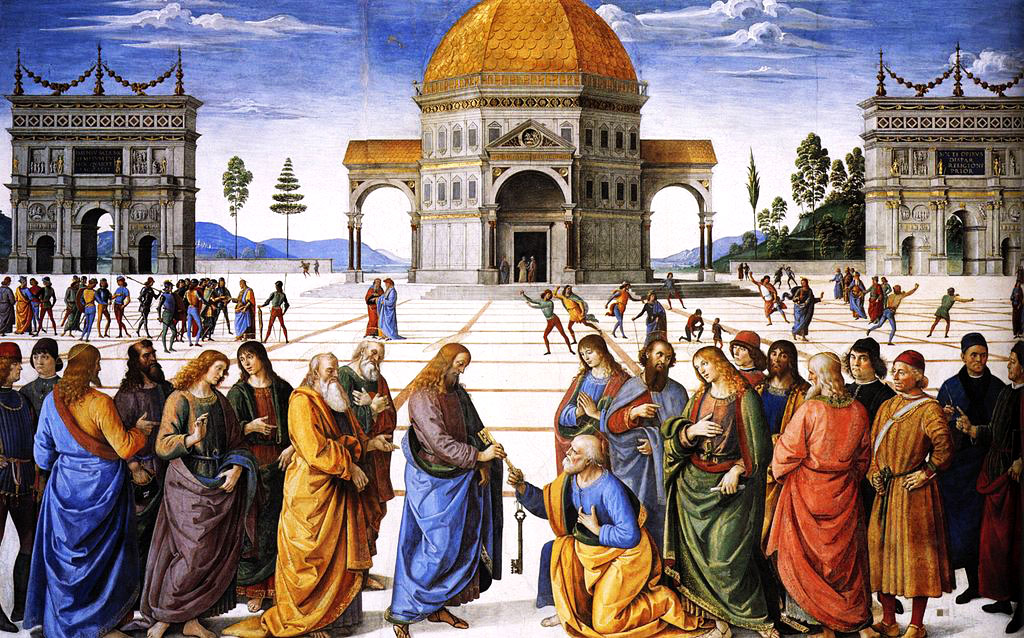 Here is a brief overview of the history of the Catholic Church from its founding during Jesus’ time to the current day.

The Apostolic Era and the Papacy 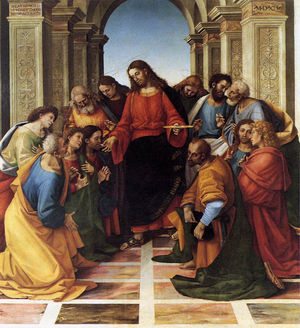 And so I say to you, you are Peter, and upon this rock I will build my church, and the gates of the netherworld shall not prevail against it. Matthew 16:18

Christianity is founded on the teachings of Jesus Christ who lived and traveled around the province of Judea in the first century AD in order to spread the Word of God. He would later establish the earliest form of the Christian Church through the Apostle Peter. The appointment of Peter as the “rock” upon which Christ will build his church is one of the most important factors that led to to emergence of the Catholic Church.

The Catholic Church considers the Pope to be a successor of Peter who is seen by scholars to be the first Pope. Peter’s role was essential in the introduction of the papacy in the church.

The Roman Empire saw many significant developments and changes which in turn influenced the early history of the Catholic Church. In the area of infrastructure, the empire’s expanding network of roads coupled with the Pax Romana made traveling safe and much more convenient. The empire also propagated a common culture rooted in Greek origins. All of these developments were instrumental in the spread of Christianity.

One quality that made Christianity unique from most of the other religions practiced in the Roman Empire is its strict renunciation of other gods. This practice, adopted from Judaism, would later create friction in Roman Society. Christians refused to participate in pagan celebrations which were integral to public life in Rome. This caused non-Christians to fear that the emerging religion was offensive to their gods and thereby threatening to the progress of the empire. This outlook led to the persecution of the early Christians. 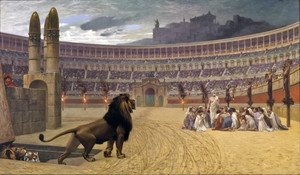 In 313 AD, Emperor Constantine I legalized Christianity via the Edict of Milan and declared Constantinople the new capital of the empire in 330.

In 380, Nicene Christianity became the state church of the Roman Empire through the Edict of Thessalonica and this position would last until the fall of Constantinople in 1453.

The five sees of Rome, Constantinople, Antioch, Jerusalem and Alexandria emerged throughout the period of the Seven Ecumenical Councils. Emperor Justinian I formalized this pentarchy in the middle of the sixth century.

During the Council of Chalcedon in 451, the See of Constantinople was elevated to a position that was second only in terms of power and eminence to the Bishop of Rome.

The period between 350 to 500 saw a steady increase in the influence of the bishops or popes of Rome. Their authority was constantly sought after by orthodox leaders to resolve theological disputes.

In the era called the Byzantine Papacy which lasted from 537 to 752, Emperor Justinian founded a form of caesaropapism which let him control and regulate every aspect of both the state and church. This move let him reestablish imperial power not just over Rome but in other parts of the West. The popes of Rome, as a result, needed to seek the emperor’s approval for consecration which were selected from his own Greek-speaking subjects. This setup led to a melting pot of Western and Eastern Christian traditions which manifested in art and liturgy.

In the following centuries, the Roman Empire would suffer various invasions of Germanic tribes. These tribes adopted the Arian form of Christianity which was declared heretical by the Catholic Church. The impending religious conflict between Germanic leaders and their Catholic subjects was prevented in 497 when the Frankish ruler, Clovis I, converted to orthodox Catholicism. 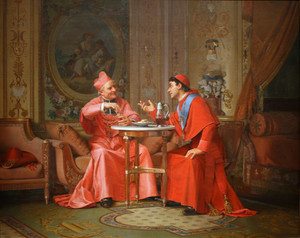 The Catholic Church exerted major influence over Western Civilization from Late Antiquity to the beginning of the modern age. The Church advocated various movements in art, architecture and music particularly of the Romanesque, Gothic, Renaissance, Mannerist and Baroque styles. During the Medieval Age, huge Gothic cathedrals became testaments to the magnificence of the Catholic Faith.

The College of Cardinals was established during this era, particularly in the 11th century. This was made possible through the efforts of Hildebrand of Sovana. The College of Cardinals has been responsible for electing popes since the year 1061 with Pope Alexander II as the first elected pope.In 1095, the First Crusade was launched to suppress renewed Muslim invasions in the Byzantine Empire and to regain control over the Holy Land. Pope Urban II initiated the crusade after Byzantine emperor Alexius I sought his help.

In the 11th century, the Greek Church separated from the Latin Church in what is known as the East-West Schism. This separation was caused partly by conflicting interests over papal authority.

Francis of Assisi and Dominic de Guzman started mendicant orders in the 13th century. These religious orders focused on evangelizing and ministering to the poor and required advocates to adopt a lifestyle of poverty. These mendicant orders also pursued the studia conventualia and the studia generalia which were influential in transforming cathedral schools and palaces into prominent European universities.

The 14th century was marked by increased conflicts between the church and the state. Clement V moved in the fortified southern French city of Avignon in order to escape the social tension in Rome. He was the first of seven popes to live in Avignon and marked the era known as the Avignon Papacy.

The Council of Florence took place in 1438 which aimed to reunite the Catholic and Orthodox churches. The dialogue that took place moved several eastern church to reunite which formed the Eastern Catholic Churches. 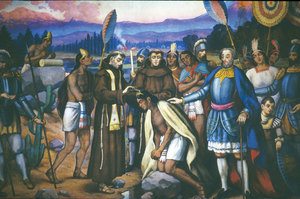 The Age of Discovery took place in the 15th century and was marked by Western Europe’s aggressive propagation of its political and cultural influence around the world. Spain and Portugal were global superpowers during this time and their strong Catholic influence caused the religion to spread to the Americas, Asia and Oceania.

In 1517, the Augustinian Friar Martin Luther wrote his Ninety-Five Theses in which he protested many fundamental points found in Catholic Doctrine and the sale of indulgences. Huldrych Zwingli, John Calvin and other reformers also criticized many Catholic teachings and traditions. These challenges paved the way for the Protestant Reformation which in turn resulted in various Christian denominations collectively known as Protestantism. 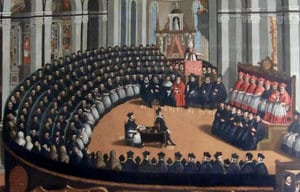 The English Reformation which led to the formation of Protestant Anglicanism occurred during the reign of Henry VIII. The religious movement has political roots which was triggered when the pope denied the king’s petition for a declaration of nullity for his marriage to Catherine of Aragon. Henry VIII defied the pope by passing the Acts of Supremacy and declared himself the head of the Church of England.

The Reformation caused conflicts between the Catholic Emperor Charles V and the Protestant Schmalkaldic League. The Peace of Augsburg marked the end of the first nine-year war in 1555. However, continued tensions resulted in the Thirty Years’ War that began in 1618, which was a more devastating conflict.

The Age of Enlightenment was marked by a pronounced skepticism against the power and influence of the Catholic Church over Western society. Prominent writers like Voltaire wrote scathing critiques of the church and religion in general.

In 1788, the French Revolution transferred the power from the Church to the State. Many churches were destroyed and the so-called Cult of Reason emerged. In 1801, Napoleon Bonaparte finally reestablished the Catholic Church in France through the Concordat of 1801. The end of the Napoleonic Wars saw a reemergence of the Catholic faith and the return of the Papal States. 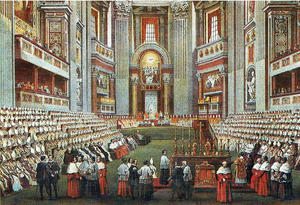 The First Vatican Council took place in 1870 and it affirmed the doctrine of papal infallibility when exercises in specifically defined pronouncements. This caused great controversy which, coupled with other issues, resulted in a breakaway movement known as the Old Catholic Church.

The papacy’s millennial temporal power ended in 1870 when the Papal States were incorporated into the Kingdom of Italy. Pope Pius IX rejected the Italian Law of Guarantees and ended up being a “prisoner in the Vatican.”

The 1929 Lateran Treaties resolved the conflict in which the Holy See finally recognized Italian sovereignty over the former Papal States. On the other hand, Italy also acknowledged papal sovereignty over Vatican City as a new independent state. 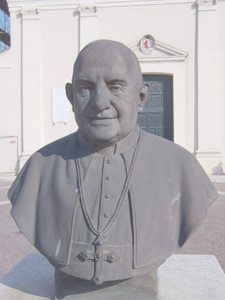 Many changes in Catholic practices were enacted during the Second Vatican Council of the 1960s. Pope John XXIII initiated the second council which modernized many existing traditions in the church. Some of the most significant changes include mass being delivered in local languages and encouraging church-goers to be “fully conscious and active” in their participation of liturgical practices.

Pope John Paul II was elected pope in 1978. He was the first non-Italian pope to be selected in 455 years and his 27-year term as pope was among the longest in history. He was credited by Soviet Union President Mikhail Gorbachev for hastening the fall of Communism in Europe. He was also well known for using modern media like television and radio for spreading Catholic teachings.

Pope Benedict XVI was elected the new pope after the death of John Paul II in 2005. Pope Benedict was known for upholding traditional Christian values over secularization and for using the Tridentine Mass found in the Roman Missal of 1962. He resigned in 2013 citing his advanced age as the reason. He was the first pope to resign in almost 600 years. 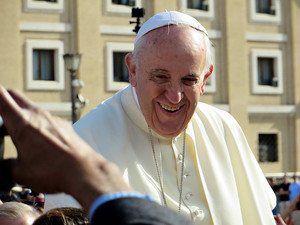 The current pope of the Catholic Church is Pope Francis. He succeeded Pope Benedict and in 2013 and is the first pope to come from the Americas and the first from outside Europe since Gregory III of Syria. Pope Francis is well-known and well-loved for his humble outlook, compassion for the poor, the environment and his focus on interfaith dialogue. He is also notable for being less formal in his approach to the papacy compared to former popes.

Pope Francis is also credited for his efforts to “further close the nearly 1,000 year estrangement with the Orthodox Churches.” On February 12, 2016, Pope Francis and Patriarch Kirill of Moscow issued a joint declaration that called for the restoration of Christian unity between their two churches. This historical event has been the first high-level meeting between the two churches since the Great Schism of 1054.