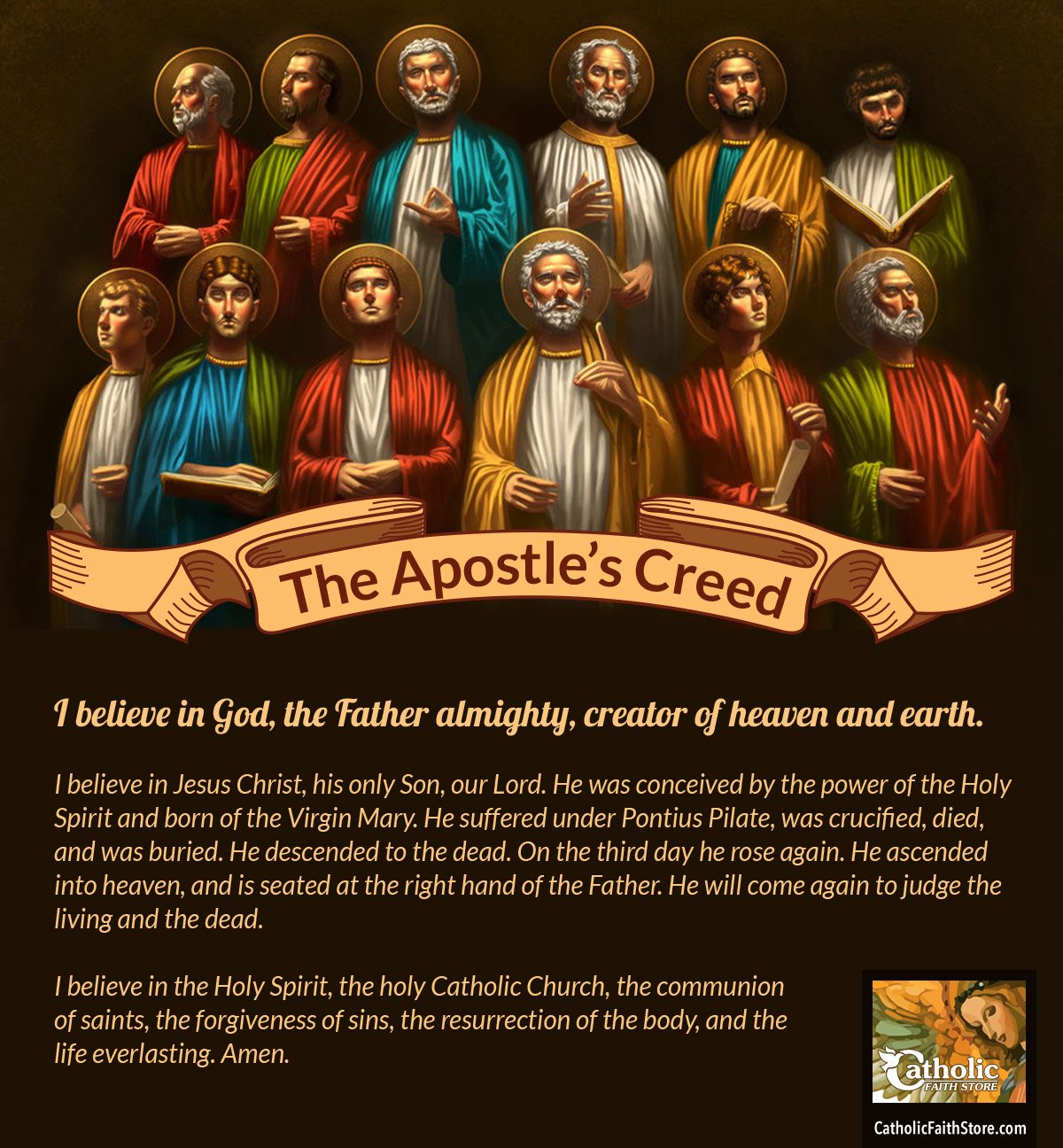 If the twelve apostles had a website, their “About Us” page would read a lot like the words of The Apostles’ Creed. It would say that they are followers of Christ on a mission to spread the Gospel and that each of them believes in:

God, the Father almighty, Creator of Heaven and earth and in Jesus Christ, His only Son, our Lord, who was conceived by the Holy Spirit, born of the Virgin Mary, suffered under Pontius Pilate, was crucified, died and was buried; He descended into hell; on the third day He rose again from the dead; He ascended into Heaven and is seated at the right hand of God the Father almighty; from there He will come to judge the living and the dead. I believe in the Holy Spirit, the Holy Catholic Church, the Communion of Saints, the forgiveness of sins, the resurrection of the body, and life everlasting. Amen.

The word creed comes from the Latin word credo, meaning to believe, trust, entrust. Much like The Nicene Creed, The Apostles’ Creed, states the main tenets of the Catholic faith and all that we as followers of Jesus believe.

The Catechism of the Catholic Church compares the impact of the creed to the mustard seed: “…Just as the mustard seed contains a great number of branches in a tiny grain, so too this summary of faith encompassed in a few words the whole knowledge of the true religion contained in the Old and the New Testaments.”

What are the origins of The Apostles’ Creed?

Unlike The Nicene Creed, The origins of The Apostles’ Creed are not clear. Many have long believed that the creed (as the name implies) was drafted by the apostles. According to catholiceducation.org tradition held that on the day of Pentecost, the apostles wrote the creed under the guidance of the Holy Spirit. Each apostle was believed to have written one of the twelve parts of faith that are expressed in the creed.

This idea has since been disputed. Instead, scholars believe The Apostles’ Creed came about from interrogations made by the bishop to catechumens (those preparing to be baptized) in the early church. The bishop would ask, “Dost thou believe in God the Father Almighty?” “Dost thou believe in the forgiveness of sins, the resurrection of the body, and life everlasting?” and so on. The Apostles’ Creed is the ancient baptismal symbol of the Church of Rome.

This baptismal creed was eventually replaced by the Apostles’ Creed during baptisms and it was recognized as the official statement of faith of the entire Catholic Church in the West by 1198–1216.

So while the apostles may not have actually drafted The Apostles’ Creed, it summarizes their teachings and beliefs, thus making the name of the creed appropriate.

What’s the difference between the two creeds? 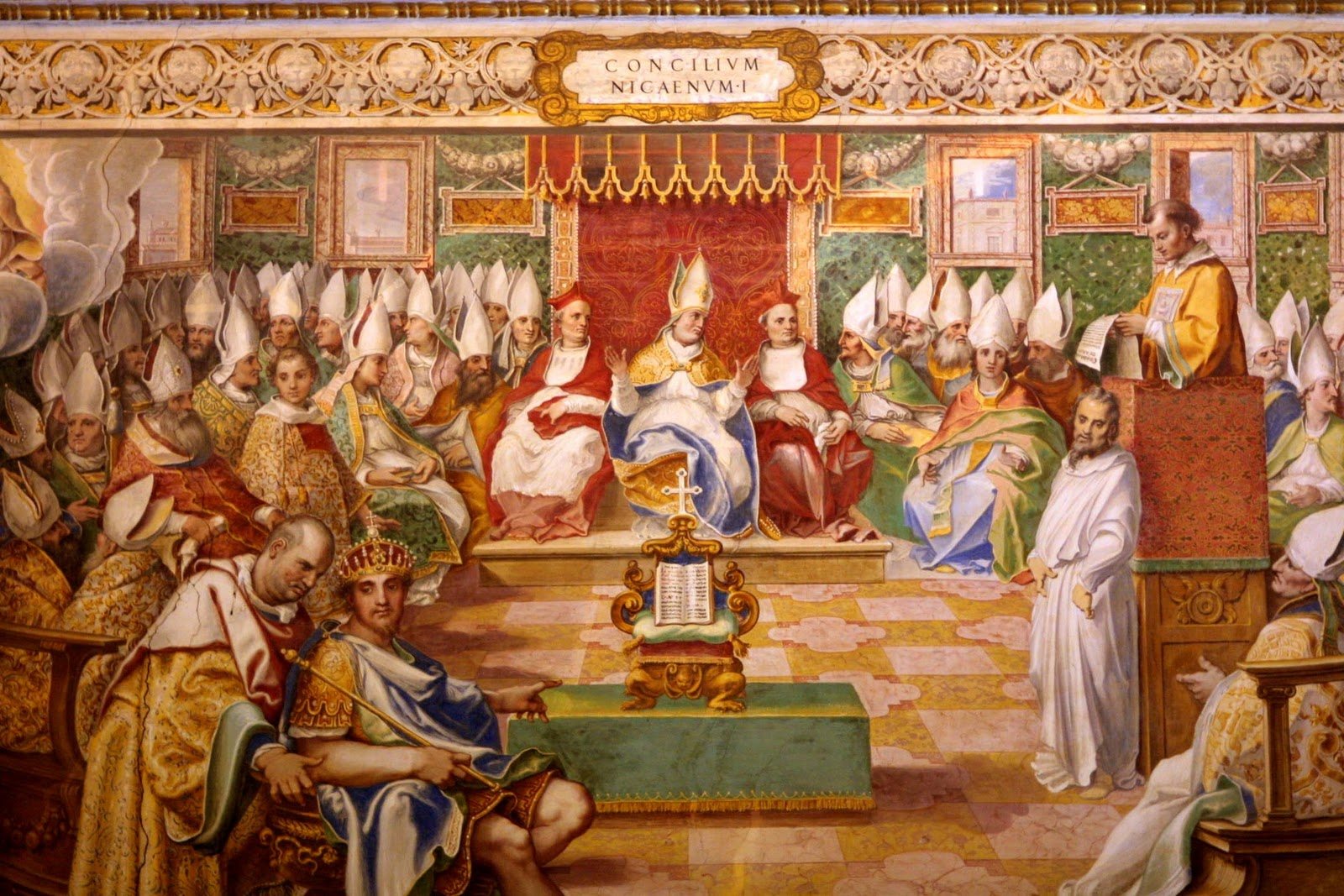 The Apostles’ Creed is the earlier, abridged version of The Nicene Creed. In the 4th century, heretics were questioning Jesus’ divinity and doubting the Holy Trinity. Disturbed by these rumors spreading around, bishops assembled twice—in Nicea and at the Council of Constantinople—to refute any doubts that there is One God, who is Father, Son, and Holy Spirit. From these meetings was born The Niceno-Constantinopolitan Creed (Nicene Creed) an expanded version of The Apostles’ Creed. The Nicene Creed explains the Catholic faith in greater detail.

When is each creed said?