Celebrating Saints: October is a good month to begin! 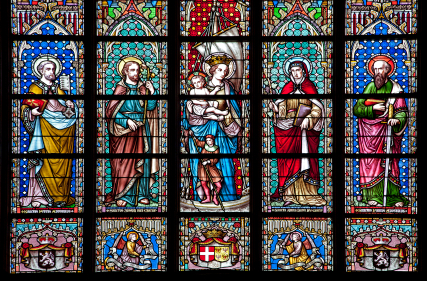 In my Religious Formation classes we spend most of October talking about saints. The saints lived out the Gospel message of love and devotion in different ways. They weren’t perfect people. Many, like St. Augustine, didn’t turn away from a sinful lifestyle until later in their lives. What the saints all have in common is a deep longing to be closer to God. There are pilgrims who set out on a certain path for Home.

Christian philosophers say that God planted that same longing for Heaven in every soul. That means we all have what it takes to become saints! It’s like setting out on a hike. The urge to go forward is there. But to succeed we need a backpack of supplies…a “Spiritual Backpack.” And we need to stay on the path. In our Backpack we put in prayer, the sacraments and our angels! The great love of God is all around us—it just takes better awareness to know that great truth. God has given us invisible angels, and angelic friends. We have the help of a Heavenly Mother who is loving us in every moment. And we have the witness of saints standing there on the road up ahead.

So first we pray—that’s the nourishment of the great Longing to set out on this path. Then we keep focused on the path ahead. We do this by going to Mass more often and by surrounding ourselves with things that tell us about the saints and their faith: books, websites, daily quotes delivered to email, study groups at church and adult formation opportunities.

The saints are there just ahead of us, calling out, “If I can do it, you can do it!” Every year at this time I tell my students about saints they may not have heard of. Here’s an October list:

Saint Paul of the Cross

who lived from 1694-1775 in Italy, has a feast day on Oct. 20. St. Paul felt that meditating on the Passion of Jesus is the best way to stay focused on the path ahead.  Jesus suffered terribly when He could have struck down His persecutors with one gesture. Instead, He endured pain and death out of love for us. Since we too know suffering, although not to that extreme, we have some empathy and understanding. St. Paul of the Cross founded a religious order, the Passionists, to spread greater awareness of the reason for Jesus’ suffering. He walked across Italy carrying a large wooden crucifix, making sacrifices for others and teaching.  At one point a large crowd surrounded him. When dark clouds gathered and thunder echoed all around, St. Paul held up his crucifix. The rain pelted down but no one listening to St. Paul got wet! He was a mystic and visionary who predicted that a crucifix he left behind in a church would continue the teaching he began. The crucifix began to sweat a blue liquid and all who saw it were converted!

was the French visionary of the 17th century who saw the Sacred Heart of Jesus. Her feast day is Oct. 16.  St. Margaret was a sickly child but she made a vow to the Blessed Mother to dedicate her life to prayer. She was instantly healed.  In her visions of Jesus she was told to promote the practice of receiving Communion on the First Friday of every month and attending Adoration to spend a “Holy Hour” with Jesus in His suffering at the Garden of Gethsemane.

These are important things to add to our “Spiritual Backpack,” St. Margaret Mary tells us.

lived from 1807 to 1870 and his feast day is Oct. 24. His autobiography can be found online! St. Anthony Mary started out his adulthood as an accomplished and successful weaver.  One day while walking along the seashore in Spain, a wave swept him out to deep water. He was drowning so he called out to the Blessed Mother. Instantly he was back on shore.  He recognized the message of this incident: the “sea of peril” in worldly things was causing him to neglect his soul. He had gone off the path and he understood that “neglect” is what kills the soul. St. Anthony Mary had a missionary spirit and set out to preach in both Spain and Cuba. He was devoted to the Immaculate Conception after seeing Our Lady in visions. She asked him to promote the rosary in the modern world.

was a Duchess from Poland who died in 1243. Her feast day is also on Oct. 16. She was from a royal family but she rejected the trappings of wealth and gave to the poor. She washed the feet of lepers, fasted and prayed for others, and helped start monasteries. After her husband’s death she joined a convent led by her daughter. There she grew in holiness, developing and using the “tools in the Spiritual Backpack.”  Her life story isn’t flashy. She was simply prayerful and pious every single day. During the process of canonization, the Pope asked for her intercession for a blind girl. The girl was immediately cured.

The urge to set out on the saintly road is inside of us. Let’s begin!

Saint Paul of the Cross: Oct 20

What Are the Holy Days of Obligation?

God Invites You to a Journey of Faith. The Pilgrimage.

On the Feast of the Annunciation: When a Woman Says “YES”

The Spirit of the Irish