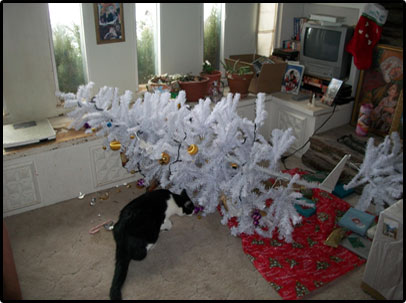 This is our babies’ First Christmas. “How sweet,” you say.  Well, not really…

That’s because one “baby” is a cat named Freckle. The fat cat fights with baby #2, an overgrown puppy. Between the two of them we have Christmas troubles.

Freckle came to us on the fourth of July. Independence Day is quite appropriate as the new beginning for a stray kitten. Back then, Freckle was tiny and cuddly  and interested in religious things. Brigit, age 13, found him roaming around outside the church, crying out his prayer that some unsuspecting person would take him home.

And that would have to be the child who regularly brings home strays. Brigit carried him into the sacristy to show him to her favorite priest, Fr. Larry.

“I see you found my kitten,” Father said.  Brigit’s face turned from a smile to a frown. But Father continued. “That kitty has been here since last night trying to sneak into Church. And I’d take him home in a minute. But our parish pastor is allergic to cats. So…that means….”

“That means I can hold him during Mass, right?”

“If you keep him quiet and you pray!”

So that’s how we brought home “Fr. Larry’s cat.” My husband made a contract with us–Fr. Larry owns the back half and we own the front. So, Fr. Larry obligingly brings the cat regular gifts of …cat litter!

Now, fast forward six months to his first Christmas. Freckle has grown to be a bruiser of a cat at sixteen pounds! He likes to pounce, PLOP, on the middle of my computer keyboard. There is not a shred of gracefulness in him. And he has been eyeing the Christmas tree since it went up.

Meanwhile, a trip to the grocery store meant we returned with few groceries but one large puppy! Now the cat pulls down the Christmas tree and the puppy tries to eat it! When they aren’t attacking the tree, they are rolling over each other in one round ball of fur.

The top of the recliner is where Freckle likes to spread himself out like a thick bear rug.  Sadly, Brigit’s brother, Peter, ignored the cat-proofing regulations and set a box of fragile glass ornaments on top of the chair. Freckle saw the toy but was quite disappointed since it only took one swat to send that box crashing. The fat cat sifted through the mess, spreading glass crumbs far and wide.

If we reprimand Freckle he knows how to cross his paws to look like he’s praying. He looks up with those big moist eyes and says, “At least Fr. Larry loves me!”

Meanwhile the puppy ate one of my presents from under the mutilated tree.

In honor of Freckle’s priest, Fr. Larry, we want to remind everyone not to forget the parish priest this Christmas. In the past, I have created religious artwork for our pastor. This year, though, I think Fr. Larry will get a portrait of his “praying kitty.”

One of our priests told me secretly that he has been given enough scarves as Christmas presents to create a mummy! And priests tend to receive enough sweets to start a special ward for diabetics at the local hospital. So think about creative alternatives this year!