The Miraculous Medal — Designed by the Virgin Mary Herself!

The Catholic Church is filled with symbols and images meant to be visual reminders of our faith. These symbols tell a story and often reveal a powerful message. Besides the cross—the most recognizable image of the Catholic faith — the Miraculous Medal, or the Medal of the Immaculate Conception, is another popular image that’s rich with meaning. What makes the Miraculous Medal so significant is that the Virgin Mary appeared to a French nun by the name of Catherine Laboure in 1830, and revealed to her the exact design of the medal. She told St. Catherine how the medal should be worn and how it will protect the wearer. The month of August is dedicated to the Immaculate Heart of Mary, and in honor of Mary’s Immaculate Heart let’s takes a closer look at how this medal came to be and how it’s still significant 184 years later. The Virgin Mary appeared to Catherine Laboure, a young novice in the Daughters of Charity order, several times in 1830. During her first apparition on July 18, 1830, Mary revealed to Catherine that the world is in turmoil and will continue to experience great suffering in the future. Many people will turn from God, “the cross will be scorned, blood will flow in the streets, and the entire world will be saddened.”

She went on to tell Catherine that God has entrusted Catherine with a mission. She warned Catherine that she will encounter many difficulties throughout her life, but that she will overcome them as long as she “did everything for God’s glory.” She consoled her by telling her to, "Come to the foot of the altar...There graces will be shed upon all, great and little, who ask for them. Graces will be especially shed upon those who ask for them." During Mary’s second apparition on November 27, 1830, Catherine described Mary as wearing a long, white veil and standing with bare feet on a globe. Her eyes were raised towards Heaven and her hands were extended. She was wearing rings encrusted with stones on each of her fingers; each of the stones emitted radiant beams of light.

The Blessed Virgin spoke to Catherine telling her, “This globe that you see presents the entire world, especially France, and each person in particular…this (the beam of light) is the symbol of the graces that I pour out upon those who ask for them.”

Next, an oval picture formed around the Blessed Virgin with the words,

“O Mary conceived without sin, pray for us who have recourse to thee,” written in gold. During Blessed Mary’s third apparition, she instructed Catherine to "Have a medal made according to this model. Everyone who wears it especially around their neck will receive great graces. For those who wear it with confidence there will be abundant graces."

Meaning of the Miraculous Medal — Front Side The medal is typically oval in shape and on the front is an image of the Blessed Virgin with her arms outstretched and beams of light radiating from her hands. She has a halo around her head and is standing on a globe. Under her feet, Mary is crushing a serpent, which is a symbol for the devil. This act is a reminder of the constant battle between good and evil in the world and of Mary’s ability with God to destroy the devil and his works. Circling the outer edge of the medal is the prayer,

“O Mary conceived without sin, pray for us who have recourse to thee.”

This short prayer recalls that the Virgin Mary was conceived without original sin and born “full of grace.” The year 1830 marks the year that the Blessed Virgin appeared to Catherine.

Meaning of the Medal—Back Side The back of the medal has the capital letter M prominently centered with a cross rising from the top. The letter M stands for Mary while the cross represents the salvation of Jesus’ cross. The bar under the cross is the Earth. The 12 stars that dot the outer edge reference the 12 apostles who helped establish the Church. The stars can also refer to the verse in the Book of Revelation,

“A great sign appeared in heaven: a woman clothed with the sun, with the moon under her feet and a crown of twelve stars on her head.” (Revelation 12:1)

Under the letter M are two hearts; the left heart is the Sacred Heart of Jesus who died for our sins; the right heart is the Immaculate Heart of Mary who intercedes for us.

Why is the Medal “Miraculous?”

...those who wore the medal and became devoted to Mary almost immediately began to receive the blessings that Mary had promised.

Production of the medal began in Paris in 1832. According to the Association of the Miraculous Medal, those who wore the medal and became devoted to Mary almost immediately began to receive the blessings that Mary had promised. People reported graces of good health, prosperity, and peace. The devotion soon spread throughout the world and the medal became known as being truly “miraculous” for those who wore it. In 1836, an inquiry found the apparitions reported by Catherine Laboure to be true. Catherine Laboure died in 1876 and was canonized a saint in 1947.

In honor of the month dedicated to the Immaculate Heart of Mary, consider gifting a miraculous medal to your loved ones. It makes a poignant gift for those celebrating a birthday, wedding, anniversary, or for those who are heading off to college for the first time. Here are some favorites from our collection: This Sterling Silver Miraculous medal is surrounded by a border of blue stones and inscribed "0 Mary, conceived without sin, pray for us who have recourse to thee." This Miraculous medal is charm sized and would be suitable for a baby or young woman. Its ornate outline borders the image of Mary on the front and the back features the Miraculous symbols and stars. 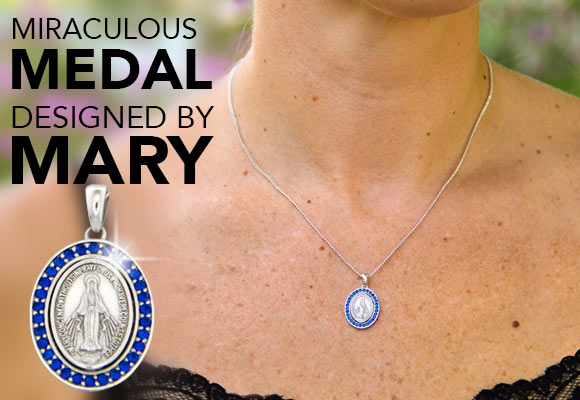 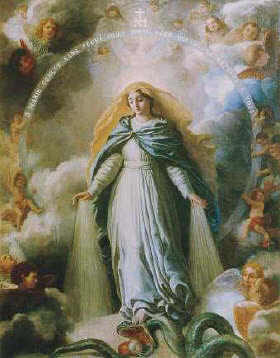 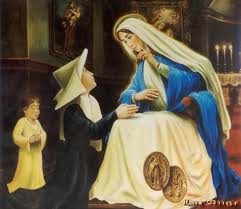 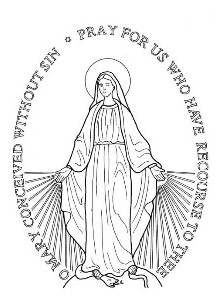 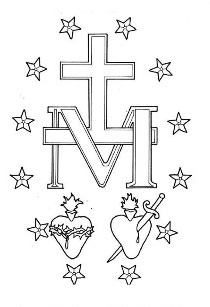