The Feast of St. George 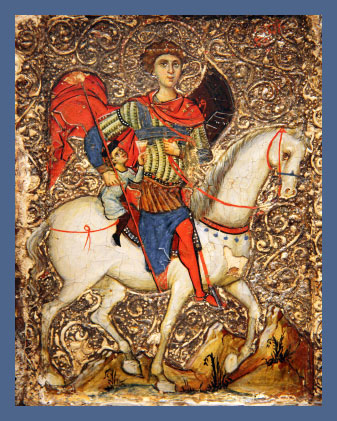 There was a historical figure named George, who lived from approximately 280 to 303. We know that he traded a military career for the role of “knight for Christ, defender of the faith.” In many of our holy card images of St. George he is portrayed as slaying a dragon….Here’s the story:

According to the old legends about George, an entire pagan village lived in fear of a large and terrifying creature. (Was it a crocodile perhaps?) It had taken up residence in the community spring—their only source of water—and the people wanted to placate it.

In order to fill their buckets, the people tempted the creepy creature to leave the water by offering it a sheep. When the villagers didn’t have enough sheep to give up, they began to surrender their daughters as an offering to the croc. The girls were picked by lottery.

One day a beautiful maiden was chosen as the sacrifice. As she was being bound, a young man on a strong horse appears on the horizon. He prays fervently and then goes into battles against the crocodile. When he defeats the creature, the people of the village convert to Christianity and St. George rides off with the beautiful maiden.

This allegorical narrative reminds us that the world—our village–tells us we should compromise with evil. “Don’t try to resist its mighty power.…placate the devil in order to keep the peace.” But, what the villagers never realize, is that the price of “giving in” increases over time until we are giving away all that is most precious. We end up giving away life itself.

St. George & the Armor of Truth

St. George reminds us to take up the armor of truth. Put on the shield of faith. Confront the devil and defeat his power over our lives!

As far as we know, the historical person named George was a man who defended the faith and made converts as a result of his virtue and the strength of his convictions. Although he was murdered for his faith, his soul triumphed by rising to heaven.

St. George’s feast is celebrated during the Easter season to remind us to take on the “new life in Christ” and be strengthened for battle through the power of the Holy Spirit.

During this Easter season we celebrate the gift of truth and faith that tells us life continues after death. For those who have been cleansed from sin and are clothed in love for Jesus, we will rise with Him to eternal life!

So today is a day to take courage and prepare to slay those nasty dragons!