Every July 31, we commemorate the feast day of St. Ignatius of Loyola, the patron saint of the society of Jesus, soldiers, educators and education. In time for this celebration, let us look back to his story and find inspiration in it.

St. Ignatius of Loyola was born Iñigo Lopez de Loyola in 1491 during the reign of King Ferdinand and Queen Isabella. At the time, his birthplace, the small village of Loiola, Spain, was spelled “Loyola,” hence the discrepancy in spelling.

The youngest of 13 children, Iñigo was raised in a family with strict Catholic piety but very lax morals. His mother, Marina Saenz de Licona y Balda Maria, died when he was a child and his father, Don Beltran Yañez de Oñaz y Loyola, died when he was 16 years old.

Iñigo’s chivalric yet academically limited education was meant to prepare him for a life in the service to the crown. He spent time as a page at court and lived a flamboyant lifestyle. He was a fancy dresser, dancer, womanizer and roguish swordsman who used his status to avoid being prosecuted for his misdeeds.

At the age of 18, Iñigo became a soldier and fought for the Duke of Nájera and Viceroy of Navarre. 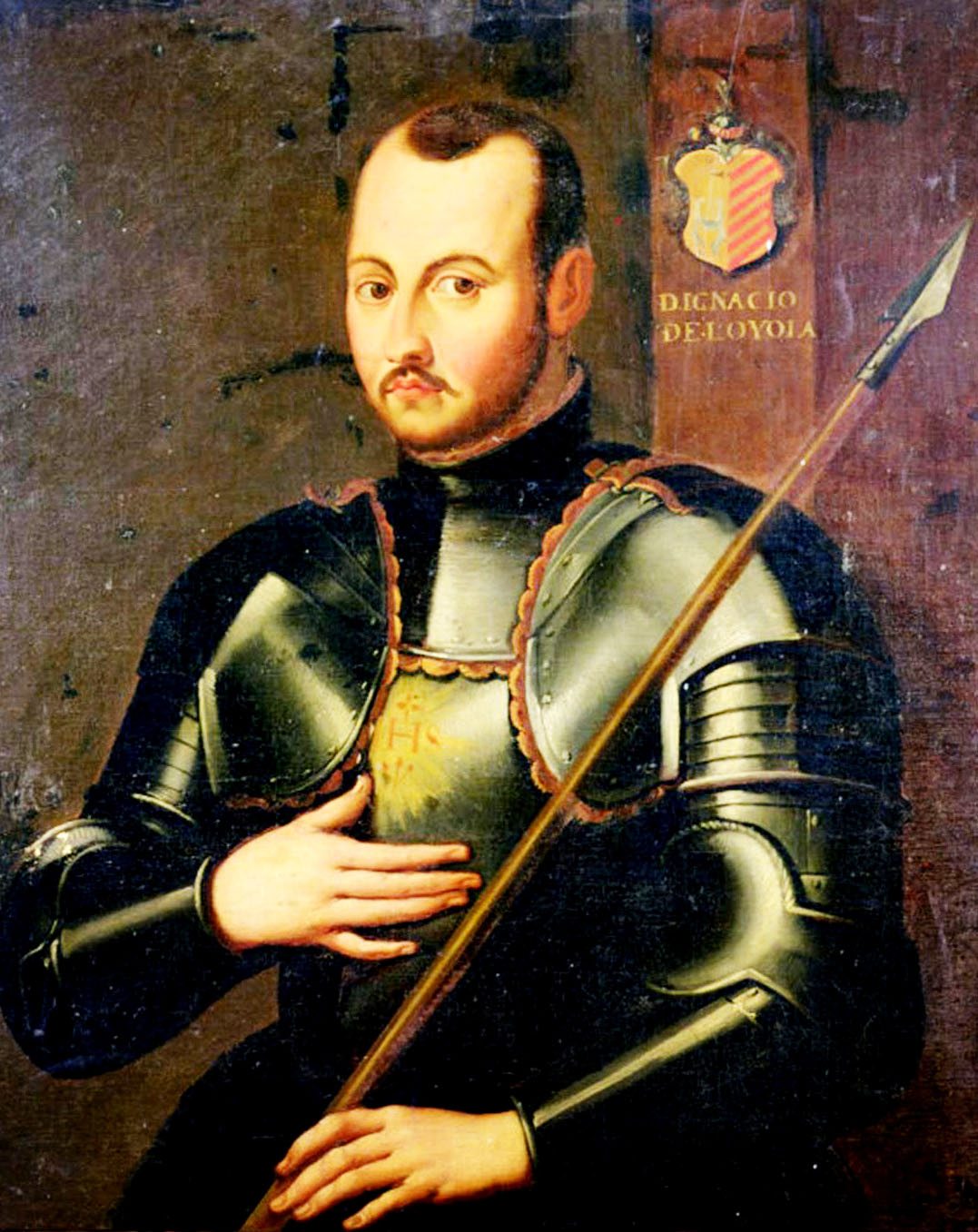 In 1521, Iñigo’s life was turned upside down when a cannon ball struck his legs as he was defending the town of Pamplona against French attacks. The horrific incident left one of his legs severely mangled. He underwent several painful surgical procedures supposed to save his life and possible his legs. Unfortunately, his condition worsened and doctors told him to prepare for his death.

During his difficult recuperation, Iñigo started reading whatever books he could get his hands on. Majority of the reading material he found were about Jesus Christ and the saints. What he read touched him deeply.

When Iñigo could finally walk again, he embarked on a momentous journey to Jerusalem just so he could “kiss the earth where our Lord had walked.” In the town of Montserrat, Spain, Iñigo donated his clothes to a poor man and in front of the Black Madonna in the church of the Benedictine abbey, Iñigo surrendered his sword and dagger, marking a transformative chapter in his life.

The Ministry of St. Ignatius of Loyola

St. Ignatius of Loyola hoped to live a life of service to God in the Holy Land by preaching. When this plan did not pan out, he was still determined to find a way to serve God and help souls. To prepare for his ministry, he returned to Barcelona to attend a free public grammar school. This would be his stepping stone for university.

At 38 years old, Iñigo started studying at the Collège Sainte-Barbe of the University of Paris which was the heart of the French Renaissance. He was not very fluent in Latin or French but despite his personal limitations he worked hard to learn.

At the University of Paris, Ignatius became friends with Peter Fabor, a young man from the South of France, and Francis Xavier, a nobleman from the east end of the Basque country. The group of men shared a common dream of traveling to the Holy Land. Unfortunately, this was a time of war between Venice and the Turks so the journey was extremely dangerous if not impossible.

Because they could not go to the Holy Land, the friends decided to visit Rome where they offered their lives in service to the Pope. Pope Paul III welcomed the three and approved them as an official religious order in 1540.

The Society of Jesus

Iñigo’s friends wanted him to become their first leader. At first, he declined because he believed his youth was not virtuous enough for the role and that there were others who were more qualified than him. But his friends insisted and he eventually accepted their offer.

The group called the order the Society of Jesus and at the beginning, they were mockingly called “Jesuits.” This name continues to be used today but it has lost its negative connotation because of their sincere efforts in the ministry.

The Society of Jesus is known and esteemed around the world for its contributions to education. The order reached 1,000 members and founded 35 schools before the death of St. Ignatius in 1556. The Jesuits are credited for helping stop the spread of the Protestant Reformation and were strong advocates of reason. 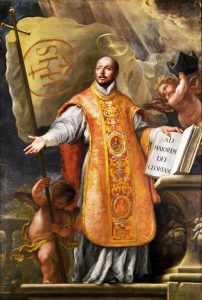 Saint Ignatius died on July 31, 1556 after becoming sick with the Roman Fever, a severe form of malaria that swept through Rome. He was beatified on July 27, 1609 by Pope Paul V and canonized on March 12, 1622 by Pope Gregory XV.

To this day, Saint Ignatius de Loyola remains an important figure both in religion and education. The Basilica of St. Ignatius Loyola, which stands next to the house where he was born, is dedicated to him. Located in Azpeitia, the Basque Country, Spain, the house has now been converted to a museum and is part of the basilica complex. The saint has also influenced many Jesuit schools and academic institutions all over the world. He is the patron saint of education, soldiers and Society of Jesus.

Take a look at these Saint Ignatius inspired gifts! 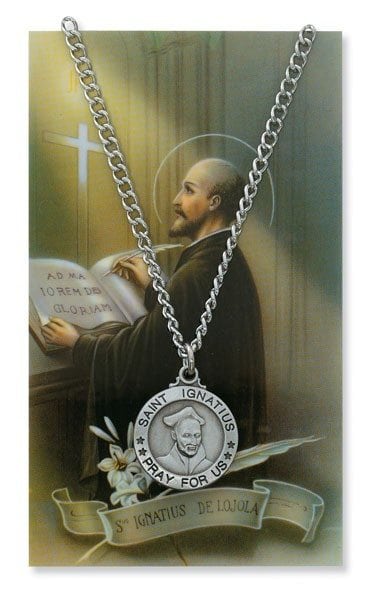 Round St. Ignatius of Loyola Medal with Prayer Card 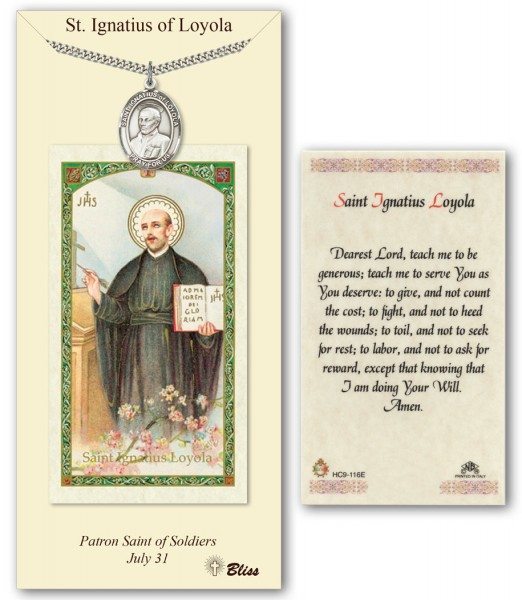 St. Ignatius of Loyola Medal in Pewter with Prayer Card 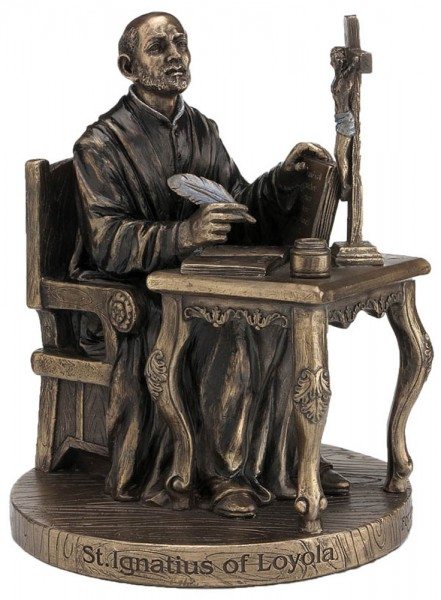 What part of the story of Saint Ignatius de Loyola touched you the most?

Which of his qualities do you admire the most?