Yes, Virginia There Is a St. Nicholas 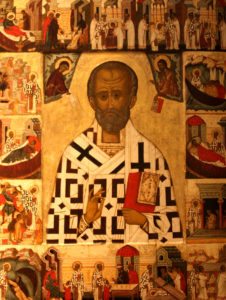 The feast of St. Nicholas is celebrated on December 6 each year and marks the anniversary of the death of the saint known as the generous gift-giver. Born in the 3rd century, there is not a lot of documented history about St. Nicholas’ life, but after extensive research, historians have been able to amass ample information about this popular saint. St. Nicholas was born in Patara, Lycia, a province of Asia Minor (now Turkey), to wealthy parents. His faith was formed early in his life, with his parents teaching him about sacred Scripture at the tender age of five. St. Nicholas was orphaned at a young age when both his parents died. Although he was left with a great fortune, St. Nicholas decided to use his wealth to help the needy and suffering. Following his faith, he heeded God’s command:

“Whoever wants to be my disciple must deny themselves and take up their cross and follow me.” (Matthew 16:24)

One of the first examples of St. Nicholas’ generosity occurred when a man who was living in the town of Patara, with his three daughters, fell on hard times and lost all his money. He lived in despair knowing that without the customary dowry, his daughters wouldn’t be able to find suitable husbands. Without husbands, he feared his daughters would face a life of poverty or turn to prostitution to survive. St. Nicholas heard about the man’s situation and during one night, filled a bag with gold and secretly tossed it through the man’s window. He provided enough gold so that each daughter had a suitable dowry and all were married. This is one of many instances throughout St. Nicholas’ life that helped him earn the title of magical gift-giver. 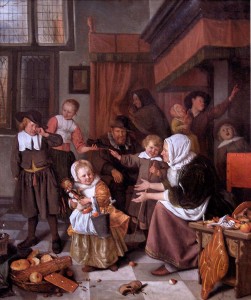 When the town of Myra was in need of a new bishop, the clergy and people eagerly appointed St. Nicholas. By then he had earned a favorable reputation for his generosity and his devout faith. During the 4th century, however, Christians were being persecuted for their beliefs under the reign of Emperor Diocletian. They were forced to renounce their faith or risk being tortured or executed. St. Nicholas was known as a defiant, steadfast follower of his faith; He preached to masses, especially the children and converted sinners. Soon, he was imprisoned by the magistrates where he was tortured and chained. During that time, St. Nicholas continued to defend the church doctrine and would not relent. He was eventually released from exile when Constantine became emperor and brought Christianity to his empire. St. Nicholas continued to spread the teachings of the Scriptures. He became a kind father figure to all, especially the poor, orphaned children. He also took a strong stand against paganism that was spreading at the time, even destroying the pagan temple of Artemis.

Over the years, many stories and legends have been told about the extraordinary life and good acts of the man who would evolve into the jolly good-natured man in a red suit we know today. Here are some of his most impactful stories: 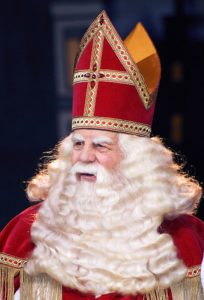 In this story, made popular throughout the Middle Ages, St. Nicholas was said to bring three murdered children back to life. Whether legend or true, the story goes that an innkeeper robbed and killed three children and kept their bodies in the cellar of the inn. St. Nicholas—who was traveling at the time—stopped at the same inn for an overnight stay. During the night, he had a dream about the crime and prayed earnestly to God that the three children be restored to life. By God’s power, they were indeed brought back to life. As a result, St. Nicholas became widely known as the patron and protector of children.
St. Nicholas Saves Sailors from a Tempest

There are many stories of St. Nicholas coming to the aid of sailors in times of trouble at sea. One of the most famous is the story of when St. Nicholas traveled to the Holy Land to visit the place where Jesus once walked and lived. On his return from his voyage, he and other sailors encountered a violent tempest. Fearing for their lives, the sailors went to Bishop Nicholas for comfort. St. Nicholas began praying to God for His protection and to the amazement of all, the seas suddenly calmed and they safely journeyed home. This and many other stories have earned St. Nicholas the title of patron saint of sailors. 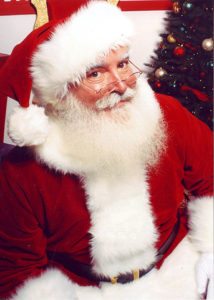 Over the years, in honor of St. Nicholas’ generous gift-giving, the tradition of giving gifts to children, especially on December 6, took hold. The Dutch later brought the custom of “Sinterklaas” to the American colonies around the 17th century. The Santa we know today with his twinkling eyes, white beard, and red suit took shape in the 19th century thanks to authors such as Washington Irving and Clement C. Moore. Moore’s iconic The Night Before Christmas, published in 1822, depicts Santa in his sleigh flying with the help of his reindeer over houses on Christmas Eve.

St. Nicholas died December 6, around 342-343 AD and his remains are housed in the Basilica di San Nicola in Bari, Puglia Italy. It’s been reported that after his death, his remains exuded sweet-smelling oil, called “St. Nicholas Manna.” Many have sought these oils for their healing abilities.