The 6 Apparitions of Fatima

​What were Mary's Messages in Fátima, Portugal?

​On May 13, Catholics around the world celebrate ​Our Lady of Fatima​. On this day in 1917, the Blessed Virgin Mary appeared to three shepherd children in Fátima, Portugal. It was the first of six total apparitions Blessed Mary would make to the children from May to October 1917. Throughout her apparitions, Mary makes predictions and warns that unless everyone prays, repents, and abandons sin, the world will suffer war, turmoil, and persecution of the Church. Let’s take a closer look at the six apparitions. ​On May 13, 1917, Blessed Mary appears for the first time to the children as they were tending the sheep in Fatima, Portugal. The children -- Lucia dos Santos, age ten, Francisco Marto, age nine, and Jacinta Marto, age seven were cousins. Blessed Mary urged the children to "Pray the Rosary every day, in order to obtain peace for the world, and the end of the war (World War I)." She instructed the children to come to the same place at the same time every 13th day of the month for the next five months.

​Pray the Rosary every day, in order to obtain peace for the world ​​As promised, on June 13, 1917, Blessed Mary appeared again instructing the children to continue to Fatima Say the Rosary every day and for Lucia to learn to read and write. Lucia was told she would live longer than the other two children and that she should spread the message of Mary throughout mankind. She told Lucia that God wants to “establish devotion to my Immaculate Heart in the world.” Whoever embraces it is promised salvation. ​On July 13, 1917 in addition to urging the children to continue to say the Rosary for peace in the world, Blessed Mary told the children to pray for the conversion of sinners and all the sins committed against her Immaculate Heart. In this apparition, Mary revealed three secrets or prophetic visions.

The first secret was a glimpse of what hell looks like and told them that to save future souls God wants the world to become devoted to her Immaculate Heart. “If what I say to you is done, many souls will be saved and there will be peace.”

The second secret was the prediction that World War I would end, but Mary warned if people didn’t stop offending God, a worse one will break out during the pontificate of Pius Xl. To prevent this, she asked for the dedication of Russia to her Immaculate Heart to prevent the damage that Russia would do to humanity by embracing communism.

The third secret was not revealed until 2000. The children saw a vision of a bishop dressed in white (who they thought to be the pope) walking towards a mountain with other priests and religious figures. During their journey they go through a town that is in ruins and the pope prays for the souls of the corpses he passes along the way. As they reach the top of a mountain, the pope kneels before a cross and he and the others are killed by soldiers.

There’s been much debate on what the third secret means. Pope John Paul II believed this vision referred to his own assassination attempt. ​On ​In August, the children were prevented by the disapproving civil authorities to go to their usual meeting place and missed Mary’s apparition on the 13th day. However, on August 19, Blessed Mary appeared to the children and urged them to continue to say the Rosary and to "Pray for the many souls that go the hell because there is none who pray for them.”

​By the fifth apparition on September 13, the children were joined by thousands of onlookers. People went to see Mary but only the children saw the apparitions of Mary and described them to the people. The Blessed Lady appeared to the children with the message: "Continue to pray the Rosary in order to obtain the end of the war. In October Our Lord will come, as well as our Lady of Sorrows and Our Lady of Carmel, Saint Joseph will appear with the Child Jesus to bless the world. In October I will perform a miracle so that all may believe." ​On October 13, 1917 the children surrounded by a crowd of 70,000 people stood under a torrential rain as Blessed Mary appeared and revealed her identity: “I am the Lady of the Rosary, I desire here a chapel in my honor to be built, that people continue to recite the Rosary every day. The war is going to end, and the soldiers will soon return to their homes. Do not offend the Lord our God anymore, because He is already so much offended.” Then the miracle she promised happened: the Miracle of the Sun.

Many described the miracle similarly: Mary opened her hands and launched a ray of light in the direction of the sun; the rain stopped suddenly and there appeared an exceptionally bright sun. The sun began to turn, projecting colorful bands of light. Then the sun appeared as if it was spinning out from the sky and towards the crowd, as people fell to their knees and begged for mercy. Meanwhile, as promised, the three children saw the Blessed Lady dressed in white with a blue cape, along with St. Joseph with the Child Jesus blessing the world. Then after this vision they saw The Lord bless the world, standing next to Our Lady of Sorrows. After this vision vanished, they saw Our Lady once more, this time resembling Our Lady of Mount Carmel.

​Celebrating the 100 Years of Our Lady of Fatima

​Pope Francis visiting Fátima, Portugal in 2017 to celebrate the centenary of the apparition of Mary has brought the focus of the devotion back into Catholics' minds.  Given the message she brought to us this is not surprising and makes us concentrate on the message she sent.

For this reason there are a number of devotional statues celebrating her apparition.

Take a look at this Statue

​This statue (SA3113) is one of the most popular statues due to the sheer elegance and sophistication of the design.

​Love it love it love love it..beautiful..because i love our Lady..today i was admitted in the hospital and while laying in the hospital bed and looking straight ahead of me i felt i saw an image of the statue that i purchased of our Lady of Fatima to my side view with her hands folded praying for me..and telling me to pray..I felt comforted.. 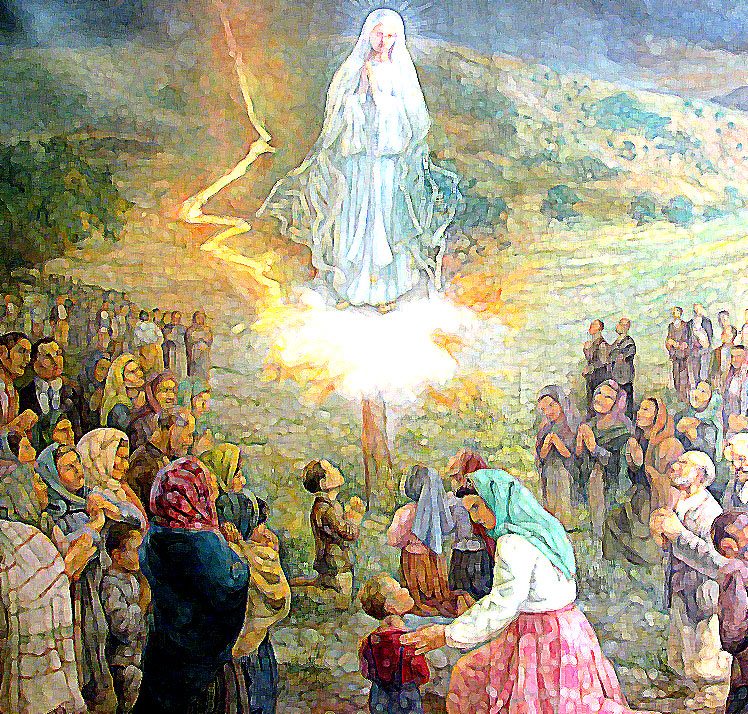