Even in doubt, God has a plan — Blessed Mother Teresa 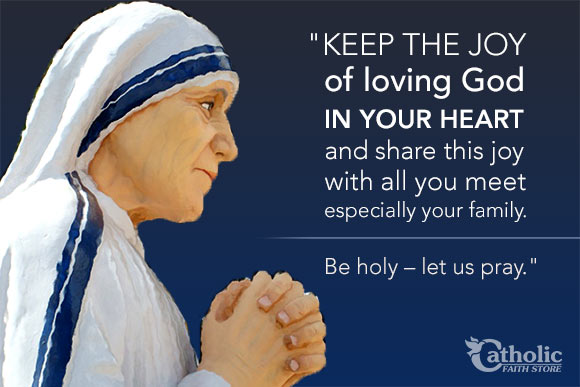 It may surprise many that these words would ever be uttered by Blessed Mother Teresa. But they were; Blessed Mother Teresa often wrote letters to a few trusted friends and spiritual directors expressing how she doubted her faith and felt completely abandoned by God at times throughout her lifetime. Blessed Mother Teresa’s personal letters were gathered by Rev. Brian Kolodiejchuk as part of his investigation into the cause for her elevation to sainthood.

In 2007, Rev. Kolodiejchuk published her letters in the book, Mother Teresa: Come Be My Light: The Private Writings of the “Saint of Calcutta.” These words go against the image many of us have long associated with Blessed Mother Teresa—a pious, selfless individual who was as steadfast in her faith as she was to her service to the poor. She always came across as one who never wavered from her faith. Yet she did—many times.

Some people may be discouraged to learn this about Blessed Mother Teresa. But, in reality, knowing that she struggled with her faith—even doubting whether God really existed—gives us great hope and encouragement. How? It shows us that Blessed Mother Teresa endured hardships, struggles, and most importantly doubted her faith just like we do. Even though she spent many years doubting God’s presence in her life, she never once wandered off the path God chose for her to follow.

Blessed Mother Teresa was born on August 26, 1910 in Skopje, Macedonia and baptized Agnes Gonxha Bojaxhiu. She answered her call to religious life at the age of 18 when she decided to become a nun; her journey would take her to Ireland to join the Loreto Sisters of Dublin. It was there that she took the name Sister Mary Teresa after Saint Thérèse of Lisieux. In 1931, Blessed Mother Teresa made her first profession of vows and traveled to Calcutta, India where she taught at Saint Mary’s High School for Girls, a school run by the Loreto Sisters and dedicated to teaching girls from the city’s poorest families. While Blessed Mother Teresa was content dedicating her life to teaching, God had other plans.

Over the course of her life, she established a leper colony, orphanages, nursing homes, family clinics, and many mobile health clinics.

On September 10, 1946, as Blessed Mother Teresa was riding a train to the Himalayan foothills for a spiritual retreat, Jesus spoke to her. He instructed her to leave her life of teaching to work in the slums of Calcutta tending to the poorest and sickest people. Jesus told her, “I want Indian Nuns, Missionaries of Charity, who would be my fire of love amongst the poor, the sick, the dying and the little children. You are I know the most incapable person—weak and sinful but just because you are that—I want to use you for My glory. Wilt thou refuse?” Blessed Mother Teresa did not refuse; after asking for permission to leave her teaching post, she did as Jesus instructed and founded the Missionaries of Charity in 1950. From that moment she set out on a journey that would touch the lives of millions of people throughout the world. Although she lived a humble life, Blessed Mother Teresa achieved great things. Over the course of her life, she established a leper colony, orphanages, nursing homes, family clinics, and many mobile health clinics. In 1979, she received the Nobel Peace Prize. At the time of her death in 1997, the Missionaries of Charity established 610 foundations in 123 countries and the nuns belonging to the order numbered over 4,000, with thousands more serving as volunteers. 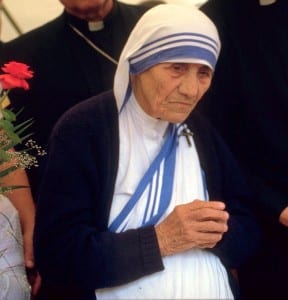 Blessed Mother Teresa always greeted the world with her iconic white and blue-striped sari and her endearing smile. Inside, however, she was secretly tormented and suffering over her lost faith. She even referred to her smile as “a mask” or “a cloak that covers everything.” Blessed Mother Teresa’s personal letters were never meant to be viewed by the public. In fact, it was her wish that all her letters be destroyed. The Vatican insisted that some of her letters be preserved as relics should she one day become a saint. Very few people knew how anguished she was about her faith, but for nearly 50 years, Blessed Mother Teresa used pen and paper to express how she felt “no presence of God whatsoever.”

In a letter to her spiritual confidant, the Rev. Michael van der Peet, she wrote, “Jesus has a very special love for you, [But] as for me, the silence and the emptiness is so great, that I look and do not see, listen and do not hear…” Based on her letters, it was determined Blessed Mother Teresa began to feel unexplainable “darkness,” “loneliness” and “torture” around the time she began working with the poor in Calcutta. It was first thought that she was adjusting to the hardships and solitude that came with her new mission. Yet, as her work was greeted with great success and more women joined her mission, she felt even more distant from God.

She wrote in 1955, “The more I want him the less I am wanted.” A year later she wrote, “Such deep longing for God—and repulsed—empty—no faith—no love—no zeal. [The saving of] Souls holds no attraction–Heaven means nothing–pray for me please that I keep smiling at Him in spite of everything.” For a time she even stopped praying.

Although Blessed Mother Teresa’s dark period lasted for most of her life, she experienced a short reprieve in October 1958. During a funeral mass for Pope Pius XII, Teresa prayed to the Pope for “proof that God is pleased with the Society.” And “then and there,” she rejoiced, “disappeared the long darkness…” Unfortunately, five weeks later she reported being “in the tunnel” once more.

Is There a Light At the End of the Tunnel?

Why did Blessed Mother Teresa suffer so much darkness and despair in her life? Why didn’t God release such a dedicated, selfless woman from her misery? As we are aware, God never makes mistakes. He has a master plan and an individual purpose for each of us. It took almost her entire life, yet Blessed Mother Teresa (with the help of one of her spiritual advisers) came to the realization that her suffering was meant to bring her closer to the suffering Jesus endured on the cross and the suffering of the poor she served. She finally realized her feelings of being abandoned by God only heightened her sensitivity to the feelings of abandonment and despair the poor and sick people around her were experiencing. Paradoxically, throughout the darkest moments in her life, she was a beacon of immense light to others.

Although she doubted God, she never shared that doubt with those she was tending to; she always led them to God. Rev. Kolodiejchuk states in his book, “Her determination not to refuse Him (God) anything allowed Him to manifest through her His love for each individual. It was the light and love of Jesus Himself that radiated from her…” What makes Blessed Mother Teresa’s life so admirable is that she was able to continue her spiritual work while experiencing her own personal spiritual torment. She pushed forward because she made a vow to God and would uphold it. Rev. Kolodiejchuk calls this a “sign of her spiritual heroism.”

So what lessons can we take from Blessed Mother Teresa’s darkest moments?

The anniversary of Blessed Mother Teresa’s death is celebrated September 5.