Why Do We Sit, Stand and Kneel at Catholic Mass?

The Basics of the Catholic Mass Order

The Catholic Faith liturgy follows its own unique set of religious rituals and traditions which are part of the Catholic Mass Order. As a member of the Catholic Faith, you probably observed some of these practices which include sitting, standing and kneeling during mass. So why do we do these things and what do they signify? 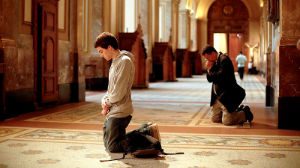 The priest acts as Jesus 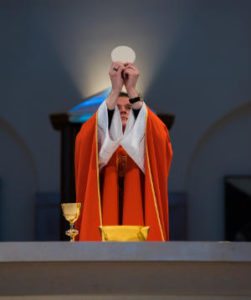 During the mass, the priest is not just leading the celebration of the Eucharist, he is acting the role of Jesus.

As Jesus, he leads us to do the different gestures, traditions and rituals that are part of the Catholic Mass Order. This is why we sit and stand when the priest sits and stands. This is also the reason why altar servers and other priests bow when they approach the celebrating priest. In this way they are showing reverence to Christ who is represented by the priest.

Jesus is present in the Eucharist 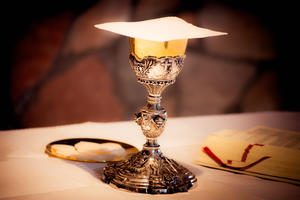 Another important thing that we should understand about the Catholic Mass is that Jesus is present in the consecrated Eucharist. This is in accordance to the doctrine of transubstantiation which states that the bread and wine become Jesus at a certain point during the Mass. The bread and wine retain their appearance but are actually transformed into the body and blood of Christ.

Why We Sit During the Mass

At the beginning of every mass, we start in a sitting position. Sitting is considered the base position of worship. This is the position from which we can stand and kneel. We sit when we are listening to the first two readings during Mass which is based on the Lectionary.

We also sit down after the Gospel reading, focused and attentively taking in the homily. We remain while waiting for the Eucharistic elements to be prepared, a very meaningful gesture because we expectantly wait and rise when the priest is ready.

Why We Stand During the Mass

The Catholic Mass starts with the Penitential Act which happens right after the priest walks down to the sanctuary. During this part of the Catholic Mass Order, we acclaim the Kyrie Eleison by saying “Lord, have mercy.”

The Kyrie Eleison is an ancient Christian tradition in which we confess our sinfulness to our Almighty Father and to our fellow Christians. This is in compliance to the New Testament command for us to admit our sins to one another. 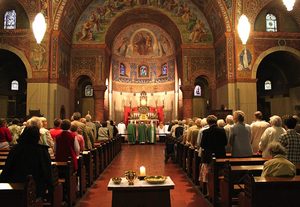 During the Kyrie Eleison and most prayers during Mass, Catholics stand up. Standing has been considered the appropriate position for prayer since before Christ’s time. When we stand, we are following this centuries old tradition.

Standing is also a simple but profound way of honoring and respecting Jesus who is represented by the priest during Mass. During the first two readings of the Bible, we are seated and listening but during the Gospel reading, we stand up.

The Gospel is the Word of God and to hear these is a great honor which is why we ascend from our base position of worship. We stand to acknowledge the significance of hearing God’s very own words.

During the reading of the gospel, we make a small sign of the cross using our thumb on our forehead, lips and over our hearts. This simple act is a symbolic request for God to impress His Word upon our minds, lips and heart.

When the priest is done reading the Gospel, he will show respect to the Words of God by kissing the Gospel and then start his homily. After the homily, we stand up to recite our either the Nicene Creed or Apostle’s Creed as a Profession of Faith.

Why We Kneel During the Mass 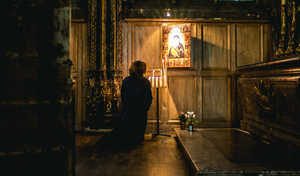 Kneeling is the most humble way of worshipping God during Mass. When we kneel, we completely submit and surrender ourselves to our Heavenly Father. We kneel during several parts of the Mass.

After the Profession of Faith, we spend the rest of the Mass on our knees. This is an incredible act of faith and devotion because when we kneel, we acknowledge that Jesus is really coming. In light of the doctrine of transubstantiation, we kneel to recognize Jesus’ presence in the Eucharistic elements after the priest says the Eucharistic Prayers.

As we kneel during the rest of the Mass, the priest will perform a number of meaningful gestures. One gesture is the sign of the cross which the priest will do at different parts of the Mass, a prayer request for Christ to come and help strengthen us with His gifts. He will make the sign of the cross over the elements and proclaim “This is my body,” and “This is my blood” over the bread and wine.

Once the bread and wine are consecrated, the priest and the people celebrating with him will kneel in front of the elements to express reverence. The rest of us will rise again when the Lord’s Prayer and the Sign of Peace are said.

The Mass is rich with meaning, every element and gesture represents something profound and beautiful. When we understand these different meanings and take them to heart, each moment we spend during Mass will certainly become more transformative and nourishing to our souls.