The Meaning of the Nicene Creed: Why It’s Still Relevant 17 Centuries Later

​What is the Meaning behind the Nicene Creed? 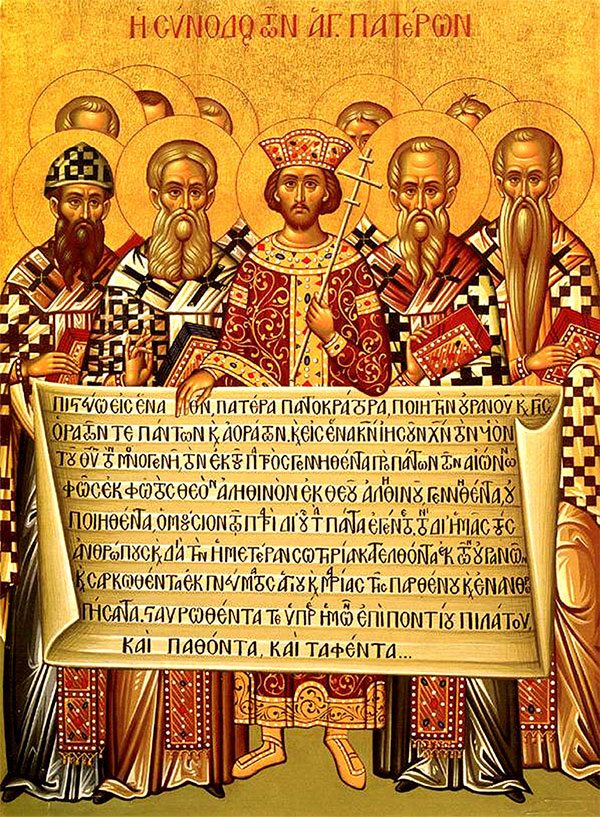 When we consider the meaning behind the Nicene Creed and long before the movie Creed hit theaters November 25, there was a different Creed garnering much buzz and grabbing people’s attention. Going way back to the 4th century in the year 325, a group of 318 bishops came from Rome, Jerusalem, Palestine, Egypt, Syria, Greece, Asia Minor, and more to meet in Nicaea (present-day Iznik, Turkey) at the request of Emperor Constantine and several concerned bishops. What were they concerned about and why the haste to hold such a meeting?

At that time, heretics led by a priest—Arius in Egypt—were raising questions about Jesus’ divinity. Heretics believed that if Jesus was created by God He must have had a beginning, and therefore, like every other part of creation, was not as eternal as God. They claimed that He had special powers given to Him by God but that He was human, not true God. Hearing that this debate was spreading throughout the area, bishops called for a meeting to defend their Christian beliefs—that there is One God, who is Father, Son, and Holy Spirit—and to uphold the doctrine of the Church.

Saints among the crowd

Among the many clergy attending the meeting, were bishops who would later become saints, including St. Silvester, St. Nicholas of Myra, St. Eusebius of Caesarea, St. Athanasius, and St. Alexander of Alexandria.

After meeting for a month, the bishops created the Nicene Creed (named after the area where they met), which states in clear terms the tenets of the Christian faith. While the Nicene Creed didn’t completely eradicate all heresy, it had a profound impact, and is recited worldwide throughout churches today. Interestingly, it’s a statement recognized not just by Catholics, but by Orthodox as well as many Protestants. In 381, church members met again at the Council of Constantinople to expand the Creed to define the divinity of the Holy Spirit. The official name of the Nicene Creed is the Niceno-Constantinopolitan Creed.

When is it said?

The Nicene Creed didn’t become part of the Mass until the 6th century at the urging of Patriarch Timothy of Constantinople to combat heresy that was still taking a stronghold. The creed is said out loud on Sundays and on holy days after the homily. The Nicene Creed is often confused with the Apostles Creed, which is a simpler version of our faith.

Like the trusty reminder apps on our smart phones, the Nicene Creed reminds us why we go to mass each week and try to live a Christ-like life once we leave the doors of the church. It’s a handy, summary of everything we believe in. While fads come and go, this simple, profession of faith is still relevant today as it was nearly 1,700 years ago. Just as in Emperor Constantine’s time, we are still surrounded by people who say the Catholic teachings are far-fetched, disputable, or don’t make sense. In a world where it’s easy to idolize celebrities and athletes, we need the Nicene Creed to bring us back to the roots of our faith. 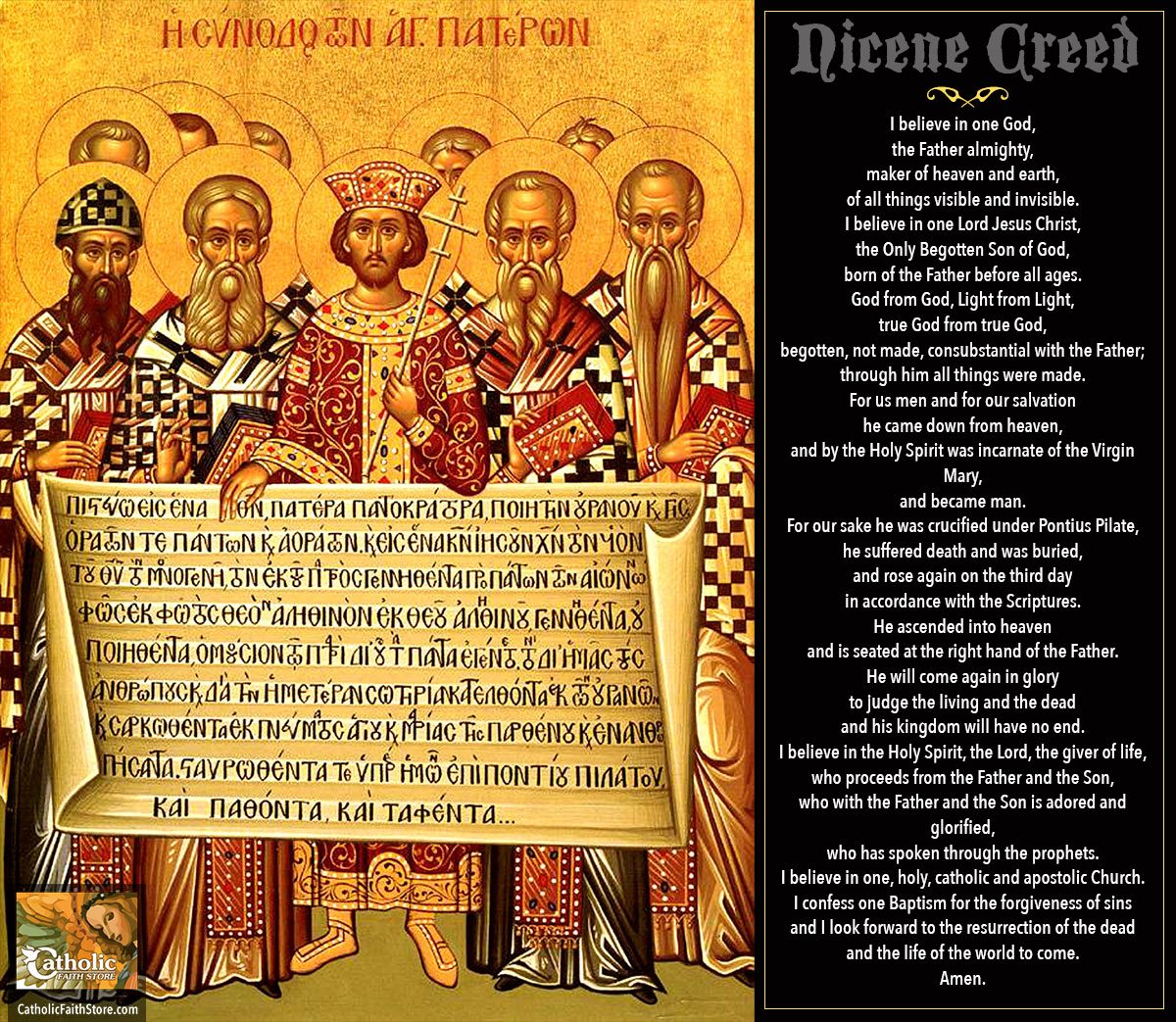 Let's Break it Down Line by Line

"I believe in one God, the Father almighty, maker of heaven and earth, of all things visible and invisible."

"Jesus is the Only Begotten Son of God, born of the Father before all ages. God from God, Light from Light, true God from true God, begotten, not made, consubstantial with the Father."

Here, the Church is making clear the divinity of Jesus, that He was not made or created by the Father, but that He always existed “before all ages.” There was never a time when Jesus did not exist. It helps to understand this line further by defining certain words. Merriam-Webster defines begotten as: “to produce especially as an effect or outgrowth,” and consubstantial as: “of the same substance.” Jesus therefore, is of the same substance of God the Father, and both are one in the same. Christ was generated or brought forth from something that already existed; He was not created like when we were conceived and born.

"Through him all things were made. For us men and for our salvation he came down from heaven, and by the Holy Spirit was incarnate of the Virgin Mary, and became man."

This is the core of our faith: Jesus became human and walked the same earth we do to save us from death. Unlike us, He was conceived by the Holy Spirit and was both divine and human. The Virgin Mary is also referenced to remind us of her role in our salvation.

"For our sake he was crucified under Pontius Pilate, he suffered death and was buried, and rose again on the third day in accordance with the Scriptures. He ascended into heaven and is seated at the right hand of the Father. He will come again in glory to judge the living and the dead and his kingdom will have no end."

As Jesus foretold, He suffered, died, and rose again three days later to give us the gift of eternal life. Forty days after His resurrection, He left the physical world and ascended into heaven. As believers we’re reminded that Jesus will come a second time to judge all the living and the dead and for those worthy will enjoy eternal peace in God’s endless kingdom.

The Holy Spirit is the third person of the Trinity and as the Creed states, should be adored and glorified, because the Holy Spirit is God. As Scripture shows us, there were instances when the prophets reveal that the Holy Spirit spoke through them, “The Spirit of the Lord God is upon me, because the Lord has anointed me to bring good tidings to the afflicted….”(Isaiah 61:1) and “Then the Spirit of the LORD came upon me, and he told me to say, ‘This is what the LORD says to the people of Israel: I know what you are saying, for I know every thought that comes into your minds (Ezekiel 11:5).’”

"I believe in one, holy, catholic and apostolic Church. I confess one baptism for the forgiveness of sins and I look forward to the resurrection of the dead and the life of the world to come. Amen."

In the final lines, we “confess” or “believe” that through our baptism we have been rid of original sin, and that we, along with all those who die, will one day enjoy unending eternal bliss with God.

​If you are looking for some quality prayer cards with the nicene creed take a look at these: 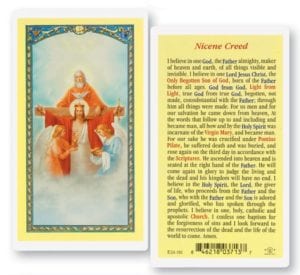