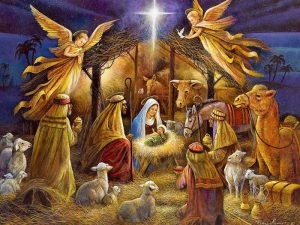 In those days a decree went out from Caesar Augustus that the whole world should be enrolled.

This was the first enrollment, when Quirinius was governor of Syria. So all went to be enrolled, each to his own town.

And Joseph too went up from Galilee from the town of Nazareth to Judea, to the city of David that is called Bethlehem, because he was of the house and family of David, to be enrolled with Mary, his betrothed, who was with child.

While they were there, the time came for her to have her child,and she gave birth to her firstborn son. She wrapped him in swaddling clothes and laid him in a manger, because there was no room for them in the inn.

Now there were shepherds in that region living in the fields and keeping the night watch over their flock.

The angel of the Lord appeared to them and the glory of the Lord shone around them, and they were struck with great fear.

The angel said to them, “Do not be afraid; for behold, I proclaim to you good news of great joy that will be for all the people.

For today in the city of David a savior has been born for you who is Messiah and Lord.

And this will be a sign for you: you will find an infant wrapped in swaddling clothes and lying in a manger.”

And suddenly there was a multitude of the heavenly host with the angel, praising God and saying:

“Glory to God in the highest and on earth peace to those on whom his favor rests.”

The Christmas story is referred to many times throughout the Bible. It captures the beautiful gift that God gave to humankind which is the gift of His only son, Jesus Christ. Christmas reminds us of how Jesus became human in order to save us but it is not just the account of his birth. The Christmas story also lets us see how Christ’s arrival transformed the lives of the people surrounding Him.

As Christmas Day draws near, let us revisit the Christmas story to remember what this occasion really stands for and learn spiritual lessons from it. It is an opportune time for us to reflect on the birth of Jesus as well as the different people who are part of this beautiful event. 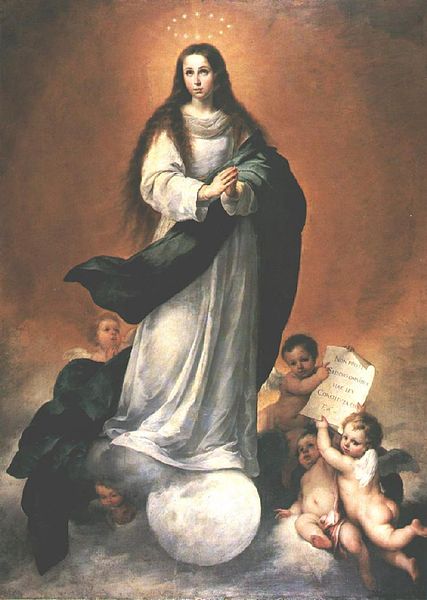 But Mary said to the angel, “How can this be, since I have no relations with a man?”

“And the angel said to her in reply, “The holy Spirit will come upon you, and the power of the Most High will overshadow you. Therefore the child to be born will be called holy, the Son of God..”

One of the most important figures in Jesus’ life is His mother, Mary. Jesus’ birth is extraordinary because He was conceived through the intervention of the Holy Spirit. Mary herself experienced an Immaculate Conception which means that she was free from sin from the moment she was conceived in the womb of her own mother.

In the same way, Mary conceived Jesus through the Holy Spirit. When the angel first told her the news that she would be the mother of God’s Son she was surprised because she was a virgin. The angel assured her that there is nothing impossible with God and at this point Mary accepted her remarkable role as “the handmaid of the Lord” with humility and obedience.

We have a tendency to feel proud and gloat over our achievements or positions. Mary’s devotion to her role as the Mother of God inspires us to be humble and have a heart for others. She raised Jesus righteously and remained steadfast in her faith. Not once did Mary brag about the incredible gift she was given nor did she demand special treatment from the people around her.

God loves us all and like Mary He has a purpose for each of us, a purpose that we should accept with humility and gratitude.

A Test of Faith 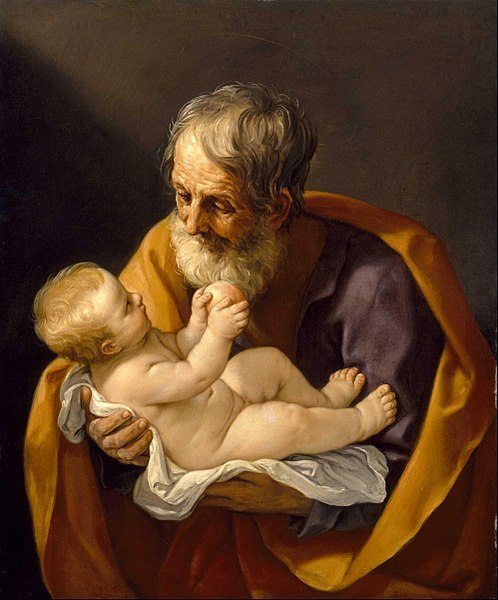 Joseph her husband, since he was a righteous man, yet unwilling to expose her to shame, decided to divorce her quietly.

Such was his intention when, behold, the angel of the Lord appeared to him in a dream and said, “Joseph, son of David, do not be afraid to take Mary your wife into your home. For it is through the Holy Spirit that this child has been conceived in her.

She will bear a son and you are to name him Jesus, because he will save his people from their sins.

Joseph is another important person in the Christmas story and Jesus’ life. To better understand the context of Jesus’ birth we need to remember that Joseph and Mary lived in a society that followed rigid rules and traditions and many of these were favorable to men. That said, Joseph had the right to leave Mary and protect his reputation when he found out that she was pregnant.

Joseph’s first reaction was to divorce Mary quietly so as not to shame or endanger her. However, God intervened and sent an angel to reveal the remarkable nature of Mary’s pregnancy. After hearing God’s revelation about Jesus’ birth, Joseph obeyed and accepted Mary as his wife.

Joseph’s steadfast devotion to God’s plans is inspiring to us Christians. From his example we learn the importance of trusting our Heavenly Father and setting aside any selfish desires that we might have. When the angel revealed the news to Joseph in a dream, he had a choice to go with the easy and very human path which is cling to his pride, doubt everything and abandon Mary. This was an important test of faith and Joseph chose to obey God and thus help bring about the fulfillment of Jesus’ coming.

Just like Joseph, we sometimes face important choices that would entail putting our complete trust on our Heavenly Father. This can be extremely hard at first especially if we are conditioned to be self-reliant and independent. However, when we realize that God loves and understands us more than anyone can, it only makes sense to trust Him and let Him guide our choices. 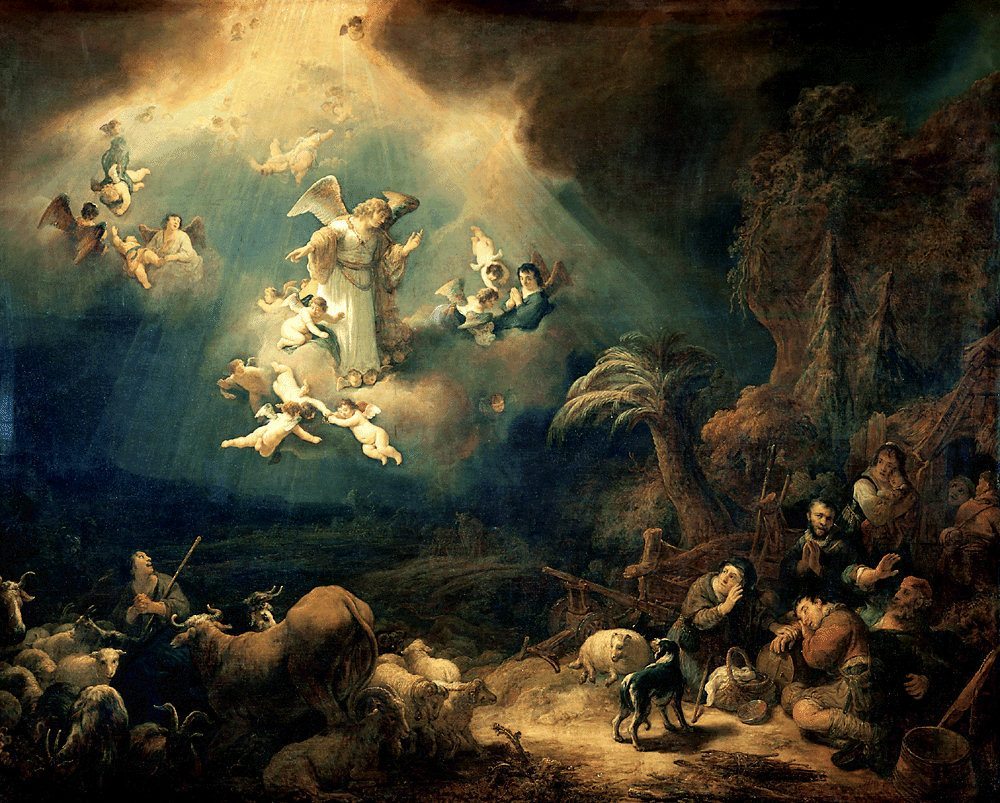 All who heard it were amazed by what had been told them by the shepherds. And Mary kept all these things, reflecting on them in her heart.

Then the shepherds returned, glorifying and praising God for all they had heard and seen, just as it had been told to them.

On the night of Jesus’ birth, a host of angels announced to a group of shepherds that a savior had been born in the town of Bethlehem. At first the men were terrified at the extraordinary sight before them. The angel, however, assured them that he had good news and the shepherds accepted the announcement of Jesus’ birth with great joy and gratitude in their hearts.

This part of the Christmas story is very interesting to note because during that time, shepherds were generally regarded to be at the bottom of the social ladder. People did not consider them to be important members of society and yet they became a witness to an amazing event.

Lessons from the shepherds:

The shepherds in the Christmas story are a good example of how God uses ordinary people to do extraordinary things. The men in the fields were not powerful or influential people, they were lowly workers tending sheep and yet God chose to send His angels to reveal the good news to them. After hearing about Jesus’ birth the shepherds immediately set out to see the Christ child and praised God for this rare privilege.

God values us regardless of our social status and achievements. More important, He wants each one of us to be part of His desire to spread the news of salvation.

What other lessons did you learn from the Christmas story? How do you plan to apply these lessons to your own walk of faith?