​Who is the Patron Saint of Police Officers?

Angels have long played a role in the Catholic faith — from creation to Jesus’ death and resurrection. Often depicted in art as chubby cherubs or serene figures with wings wearing white, angels are described by the Catechism of the Catholic Church as “spiritual, non-corporeal beings that glorify God without ceasing and who serve his saving plans for other creatures.” St. Augustine describes them as, “servants and messengers of God.” Angels are mentioned many times throughout the Old and New Testament — from when God revealed the Ten Commandments to Moses and said, “Behold, I send an angel before you to guard you on the way and to bring you to the place that I have prepared," (Exodus 23:20-21) to when the angel Gabriel delivered the message to the Virgin Mary that she would carry the Son of God, and beyond.

Angels bring us a sense of peace and security. How awesome is it to know that as the Catechism of the Catholic Church states,

"from its beginning until death, human life is surrounded by their watchful care and intercession. Beside each believer stands an angel as protector and shepherd leading him to life."

​While there are countless angels, Gabriel, Raphael, and Michael are the only angels referred to by name in the Bible. These angels were each entrusted with extraordinary missions and played a specific role in how our salvation would play out. St. Michael, also known as an archangel (an elevated angel), is called “Prince of the Heavenly Host,” and is considered the leader of the angels.

​As a police officer's role is to protect the public from the activities incited by the devil it is absolutely natural that Saint Michael is the Patron Saint. ​As the patron saint of police officers, St. Michael knows what it means to face the threat of evil and imminent danger. Saint Michael had a long history of battling the devil. Throughout Scriptures, he’s the warrior angel, standing up to and defeating Satan many times. His largest challenge and triumph over evil takes place in the Book of Revelation (12:7-8) when the devil tries to revolt against God: ​

​“there was war in heaven: Michael and his angels fought against the dragon; and the dragon fought and his angels, and prevailed not; neither was their place found any more in heaven.  And the great dragon was cast out, that old serpent, called the Devil, and Satan, which deceiveth the whole world: he was cast out into the earth, and his angels were cast out with him.”

​The prayer to Saint Michael the Archangel:

Holy Michael, the Archangel, defend us in battle. Be our safeguard against the wickedness and snares of the devil...

​is often prayed at the end of mass and holds special meaning for those in law enforcement. The prayer came about as a result of a disturbing vision Pope Leo XIII received in 1884. After celebrating mass, the pontiff was seen staring at something in space for a period of time with the look of horror on his face, when he suddenly collapsed.

Those around him feared he had died, but the pope regained consciousness and was said to have retreated to his private quarters where he wrote the St. Michael prayer. Pope Leo XIII never revealed exactly what he saw and therefore, historians aren’t exactly sure what the vision exposed. Based on the words in the prayer, however, it’s clear that he saw a vision of some sort of evil and destruction.

One version of the vision is that he heard a conversation between God and the devil, in which the devil said that he could destroy the Church if he had time and power (75-100 years).

Another account indicates that the pope saw a vision of the devil and other evil spirits trying to decimate the Church, and then seeing St. Michael intervening and ultimately triumphing over Satan and all his evildoers.

Although we don’t know what horrific images Pope Leo XIII saw or voices he heard, it is a reminder to all of us that the dangers of evil constantly surround us. We must never take God’s protection for granted; we must constantly ask for His saving hand to guard us. God also sends us St. Michael to be our intercessor against all that is wicked.

​Police Have Saint Michael on Their Side

​This powerful prayer is often said by police officers to shield them against the many dangers they face in their line of work. Whether it’s in the form of a prayer card, medal, or car visor clip with the image of St. Michael, many law enforcers have found security and peace in carrying this saint with them.

Giving the gift of a St. Michael devotional item to someone who works in law enforcement is a touching way to bring them the peace and comfort in knowing that they’ll have a warrior and “The Prince of the Heavenly Host” by their side.

​Take a look at our Favorite Saint Michael Jewelry

​Do you have a cop in your family?

Do they carry Saint Michael around with them whenever they are on Duty?

Have a story of Saint Michael protecting an Officer? 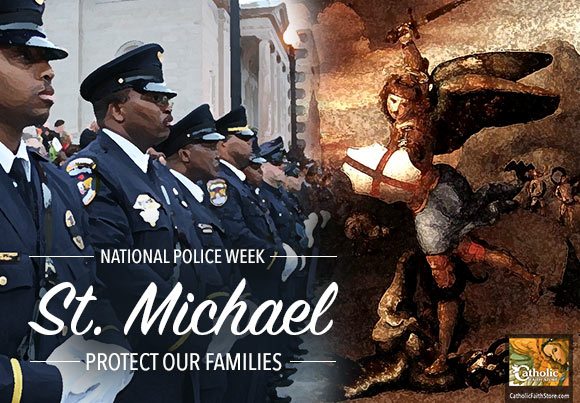