Who is Saint George?

St. George was a part of the Roman army and is venerated as a great martyr in the Eastern Church.

As one of the “Fourteen Holy Helpers” his intercession is considered particularly effective. St. George is the patron of England since 800AD. 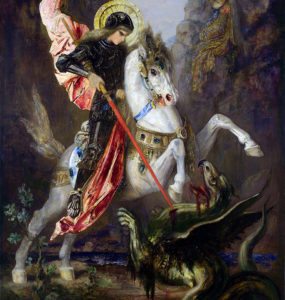 Many legends are attached to Saint George, yet the most famous is the one in The Golden Legend. There was a dragon that was terrorizing flocks and the people that lived around a lake near Silena, Libya. As Saint George was passing through, he heard the stories about the dragon defeating full armies and killing many people. When George saw the dragon was about to eat a princess, he engaged him in battle. He approached the serpent and killed it with one blow of his lance.

After defeating the dragon, he began his great preaching, and converted the people to Christianity. He distributed his reward for killing the dragon to the poor, then left the Libya.