​During times of pandemics we turn to who is the patron saint of pandemics for protection and spiritual guidance to help see us through.  Many, incorrectly, attribute this to be Saint Corona but in fact he is Saint Roch, or San Rocco in Italian.

​Who is Saint Roch?

It is said that St. Roch was born about 1295, at Montpellier, France, along the Mediterranean Sea. His birth was said to be a miracle, as his mother as not able to bear a child for years.

He was born with a birthmark on his chest that was a red cross, which grew in size as he did. His father held a position of power and influence in the city as its governor. After the death of his parents, when he was about twenty years of age, the young Roch had no inclination to take his father’s position, but handed over the position to his uncle. He then distributed his wealth to the poor and set out on a medicant pilgrimage to Rome. At that time, many people in Italy were afflicted with an epidemic of the plague, and the young Roch devoted his time, energy and prayers to the care of those in the hospitals who had been infected.

​Wherever he went, the plague disappeared before him, due to the fact that God gave him the power of working miracles on behalf of those who were suffering from the terrible disease, by prayer, the sign of the cross and the touch of his hand.

While ministering to the sick in Piacenza, he contracted the sickness himself, from which he was expelled from the city and withdrew to the forest. He would have died, except that a dog belonging to a nobleman brought him bread and licked his wounds. Roch eventually felt better and traveled northern Italy for a few years.

Upon returning to his place of birth, Montpellier, he was cast into prison as a spy by his uncle and died there, five years later, in the year 1327, without ever being known.

When his identity became known from some papers, written in gold and left on him by an angel, he was given a public funeral, which was the occasion of numerous miracles. The relics of St. Roch are venerated at Venice, and the Church has established an arch-confraternity in his house.

His feast day is celebrated on the 16th of August.

​How do you​ invoke Saint Roch's intercession?

​We call on Saint Roch to intercede for us in times of pandemic.  We need his protection and spiritual guidance to see us collectively through the difficulties caused by these.

O Great Saint Roch, Deliver us
we pray to you, from the
afflictions of this earth;
through your intercession
preserve our bodies
from contagious diseases,
and our soul from
the contagion of sin.
Obtain for us the purest of air;
but, above all, purity of heart,
assist us to make good use
of health, to bear suffering
with patience; and, after your
example, to live in the practice
of penance and charity, that
we may one day enjoy the
happiness which you have
earned by your virtues.

​How can I invoke Saint Roch's Intercession?

​It should go without saying that praying to Saint Roch, who is the patron saint of pandemics, is the best way to call on him to intercede.  Either with the prayer above or any other that you may have.  When such pandemics arise the virus or bacteria gets a foothold and multiplies raising the need for increased prayer.  We can do this individually of course, but sometimes we need the power of the many, so the more people who pray for his intercession the better the strength to overcome the pandemic will be.

​Having a pendant and a prayer card always close will allow you to pray to Saint Roch many times a day, such as this one. 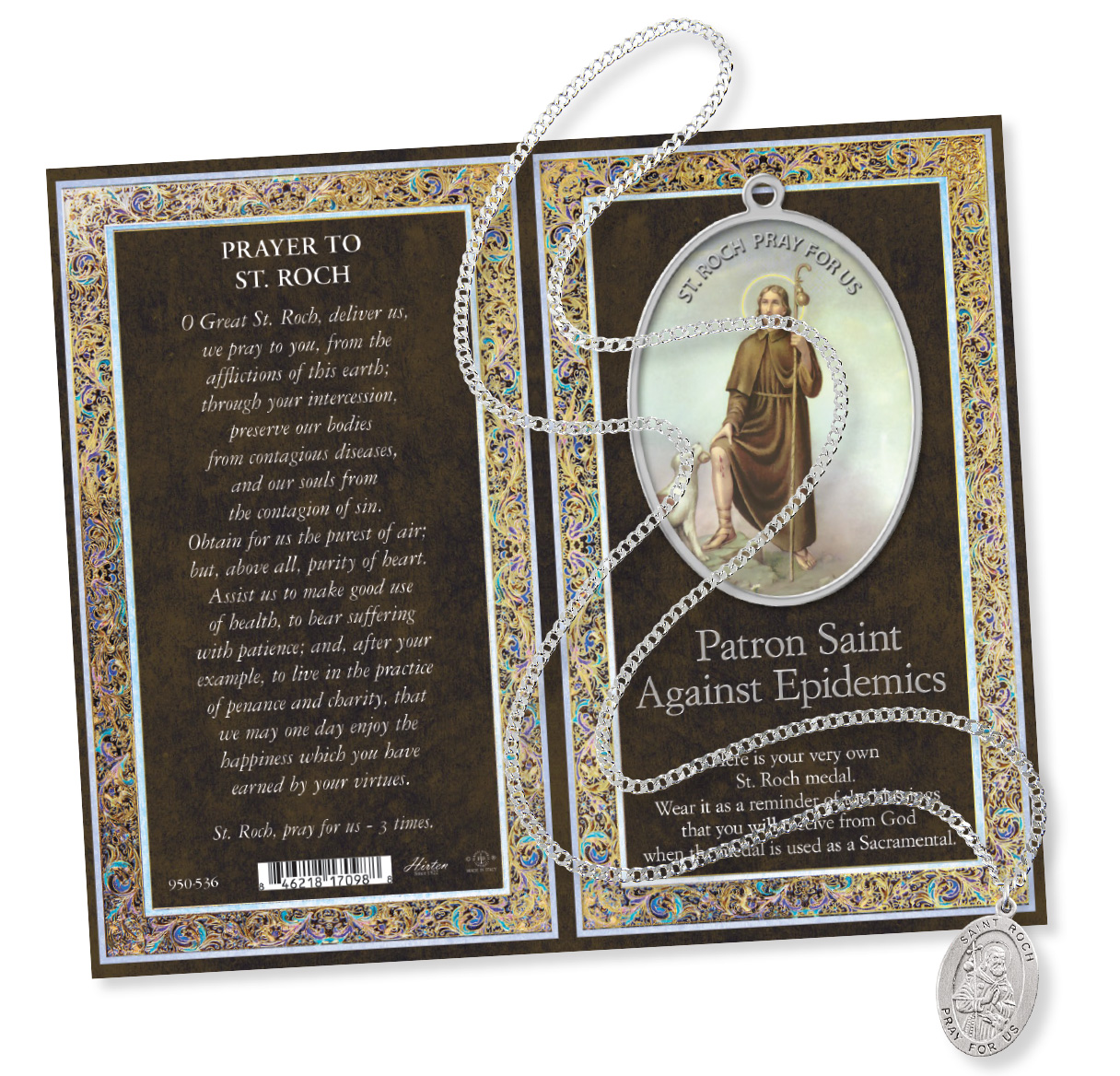