Why Catholics Start Prayers with The Sign of The Cross 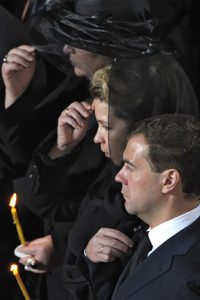 When is the last time you made the sign of the cross and stopped to think about what you’re doing? Do you make the gesture consciously and piously? Do you think about the meaning behind each gesture, or is it something you do haphazardly at the beginning and the end of your daily prayers, before meals, and as you enter and leave the church? If you answered yes to the latter, you definitely are not alone. Many of us go through our autopilot moments in life, when we’re suddenly reminded to stop and smell the proverbial roses.

Let’s take a moment to stop and reflect on the meaning of the sign of the cross. When did Catholics first adopt this practice? Why do the Eastern Orthodox Churches do the sign of the cross differently? Hopefully, going forward we’ll all stop and be in the moment each time we cross ourselves.

Historians trace this practice back to 211 AD, when one of the early church fathers, Tertullian, stated in his writings how people would regularly sign themselves throughout their daily lives: “In all our travels and movements, in all our coming in and going out, in putting on our shoes, at the bath, at the table, in lighting our candles, in lying down, in sitting down, whatever employment occupies us, we mark our foreheads with the sign of the cross.”

Much like Tertullian, most of the early Christians during that time traced the cross on their foreheads (usually with their thumb) in recognition of Christ dying on the cross for our salvation, and as a symbol that they were baptized Christians. They also believed the sign protected them from the devil and all his temptations.

[quote]In the name of the Father, the Son, and the Holy Spirit.[/quote]

Eventually, the way the early believers made the sign of the cross evolved into how we do it today: with our right hand, we touch our forehead (the Father), our breast (the Son), and our shoulders, left to right (the Holy Spirit). This change took centuries to unfold. Let’s see how this transformation came to be.

Jesus Is Both Divine and Human

In the 5th century, a heretic group called the Monophysites rejected the belief the early Christians held that Jesus was both human and divine. They believed Jesus was only divine, without having a human presence. In staunch protest against the heretics, many Christians began to make the sign of the cross using two fingers (to represent Jesus as both divine and human) and felt compelled to emphasize their belief by making a much larger sign than previously, thus they involved their forehead, breast, and eventually the shoulders, right to left.
Throughout the next few centuries, emphasis was also given to recognizing the Holy Spirit in addition to the divine and human nature of Christ. To represent the Trinity, the use of three fingers (the thumb, pointer, and middle finger pressed together) was introduced. 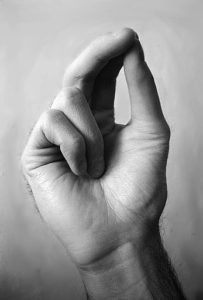 For more than 1,200 years, Christians from both the Eastern Orthodox and Western Church made the sign of the cross in the same manner: with three fingers touching the forehead, chest, and their shoulders, going right to left. There were several rationales for touching the right shoulder first, one of which comes from the Scriptures (Mark 16:19) that says that Jesus sits at the right hand of the Father: “So then the Lord Jesus, after he had spoken to them, was taken up into heaven and sat down at the right hand of God.” The right side, therefore, represents the light and all that is good.

The Orthodox Church also stresses that because the Lord separated the sheep from the goats, putting the faithful sheep on His right side, and the goats on the left, the Church regards the right side as the favored side. In addition, the early followers got into the habit of imitating how the priest gave his blessing over the congregation: from the viewpoint of the parishioners, the priest blesses them right to left.

A Shift in the Western Church

By the end of the Middle Ages, the Catholics from the Western Church changed how they made the sign of the cross, using their hand instead of three fingers and touching their left shoulder first. It’s believed this change was inspired by a 15th-century devotion used by the nuns of the Brigittine Monastery of Sion in Isleworth, England, which stated that “one should begin with the head and move downward, then to the left side, and then to the right.” The reason, the nuns said, is because “Jesus came down from the Father (forehead), was born as man (breast), suffered on the Cross (left shoulder), and ascended into heaven to sit at the right hand of the Father (right shoulder).”

Till this day, this method is the standard throughout the Western Church. The Eastern Orthodox Church continues to use three fingers to make the Sign of the Cross and most notably to touch their right shoulder first.
The Goal

Whether you sign yourself using three fingers or your hand, the most important aspect of making the sign of the cross is doing it while you are fully present in the moment. In the words of Pope Benedict XVI,

[quote]The Sign of the Cross is the fundamental act of our prayer, of Christian prayer. Making the Sign of the Cross—as we will do during the blessing—means saying a visible and public ‘yes’ to the One who died and rose for us, to God who in the humility and weakness of his love is the Almighty, stronger than all the power and intelligence of the world.[/quote]