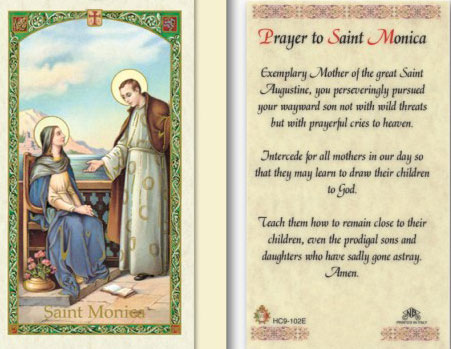 There is a lot to a name!  In Psalm 147:4 it says God named every star in heaven! He gave man the responsibility of naming all the animals (Gen. 2:20) After Jesus called Simon to be one of His disciples, He renamed the fisherman: “Now you are Peter, and on this ‘rock’ I will build my Church.”

Knowing all of this, I wanted to take a special name when I became a Third Oder Carmelite. At that time I was reading about St. Augustine.  He has written very beautiful things—“Our hearts are restless until they rest in Thee, O Lord.” But his life story was what interested me the most.

Augustine’s mother, Monica, was given in marriage at a young age to an older man.  He drank heavily and had no interest in Monica’s religious notions. Monica responded to his criticisms and mean words by going to Church twice a day to pray for him.

Then her intelligent son began to scoff at his mother’s trips to Church. He was too “smart for religion.” Augustine joined a group dedicated to self-indulgence and intellectual sparring. He got a young woman pregnant. Monica cried before the bishop, “What can I do? I must do something. Help us.” The bishop’s name was Ambrose. He told her to persist in her prayers “for surely God would not ignore her loving dedication to her family.”

Monica never gave up on either her husband or her son. On his deathbed, her husband revealed that he dreamed about being as patient and kind as his wife. He called for a priest and was baptized.  Augustine came home for the funeral of his father. Around that time he heard a little girl chanting “Pick up and read, pick up and read.” He had a Bible nearby and opened it to read that he should abandon the ways of the flesh and put on Christ. (Romans 13:13-14) Probably at that very moment his mother was also praying.  Augustine repented of his evil ways and went on to become one of the most famous saints in history.

It’s the mother who comes forth in this story.  Her name has power for me. Monica represents the essence of what it means to be a mother.  When  I find myself struggling to see into the future; planning, plotting, always trying to be one step ahead of the chaos, I think of Monica!  There are a lot of anxious nights in parenthood…my son has just started to drive alone;  he is thinking about college;  my daughter has asthma and a leg pain that doesn’t seem to go away.  What response can we have to our troubles?

St. Monica pursued a special path: regular and passionate prayer, patience and persistence. She trusted that if she brought her prayers before God every day, He would listen.  It wasn’t like saying, “Hey, can’t You hear me? Why aren’t You doing something?” Instead Monica’s prayers said, “My heart pours out these troubles again, my Lord. I must feel my love and offer this sacrifice of myself. Now Lord, I place my cares in Your hands today.”

I relate to Monica because she reminds me of my mother. For many years my mom was praying for me as I strayed from the Church. She never turned away. Her prayers were persistent. She patiently waited and longed for a change. And it finally came.
So when our Carmelite community asked me what name I chose I said, “St. Monica, patron saint of mothers.”

Happy Feast Day to another mother for mothers!