Feast of Our Lady of Mt. Carmel – We Receive Armor from Mary! 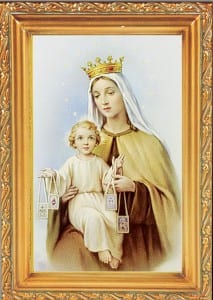 When I started attending meetings of the Third Order of Discalced Carmelites, my husband teased,

“Are you going to make low-fat caramels again?”

His joke actually has some merit–there is truly a healthy sweetness associated with The Blessed Mother and her special love for the monks of Mount Carmel!

The beautiful mountain that rises up near the Mediterranean shoreline is named Carmel, meaning “beautiful garden.” It was on this mountain that the ancient prophet, Elijah (860 B.C.)  stood alone against the 450 who promoted an immoral life dedicated to a made-up god. Elijah alone was willing to say, “There is but one God and we must be faithful and humble before him.” Jezebel, the evil queen, sought the life of the prophet. Elijah must have thought, “This is my last chance to defend the faith.”

The prophet stood his ground and the false prophets were the ones who showed their foolishness. No matter how they danced, cried out or prostrated themselves nothing happened at their altar. Then in dramatic fashion, God responded to Elijah’s prayers and burned up the water-soaked altar with fire from heaven.

Mt. Carmel represents the abundance of God’s gifts to the faithful.

But we Carmelites look to the other story about Elijah as we trace our faith roots. After his victory over the false prophets, the evil queen was more determined than ever to have him killed. That made Elijah a bit discouraged. He had called forth a blazing miracle, but instead of turning hearts back to God, he was fleeing for his life. So he moped around and felt sorry for himself. But God continued to guide and lead him. The prophet was sent to yet another mountain in the region, Mt. Horeb. This time, he was told that God Himself would come calling.

And this time, Elijah didn’t need the dramatic power of storms and fires. Instead, he recognized God in a whisper.

God whispers to all of us. The test is: Are we listening?

Anyway, fast forward several hundred years. Monks continued to pray in the caves that dot the side of Mt. Carmel. But they were forced to leave as a result of a Saracen invasion. Settling in England, on July 16, 1251, a monk named Simon Stock prayed to the Blessed Mother that his Order would survive the struggles that swirled all around them. The Holy Mother appeared to Simon with a piece of rough woolen cloth representing the ancient habit of monks…the “yoke of Christ.” She promised protection and eternal rewards for all who would dedicate themselves to her and show this devotion by wearing the scapular.

And so we come to this year—2012.  The upcoming feast is dedicated to the Mother of the Scapular who challenges us to wear a scrap of cloth as a sign of devotion. 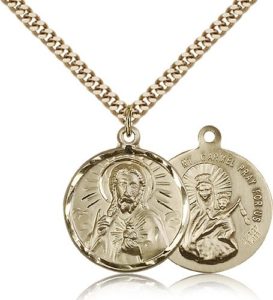 The scapular tends to cause problems when I wear it. It keeps moving in odd directions around my neck. It never stays in place. I like the challenge of it though. Every time I have to adjust it, I remember the abundant love of God who gave us a heavenly Mother.

The scapular is our armor in turbulent times…not bullet proof metal; but a soft thing shimmering in faith. Mary wants us to be always paying attention to the sweetness of Love.

Our Lady of Mt. Carmel’s promise is this:

[quote]”Take this Scapular. It shall be a sign of salvation, a protection in danger and a pledge of
peace. Whosoever dies wearing this scapular shall not suffer eternal fire.”[/quote]