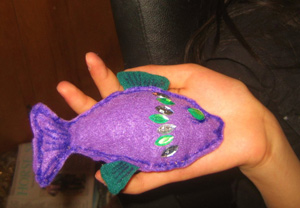 My daughter, Brigit, calls herself a true “carnivore.” She’d rather eat meat than candy. She’d rather eat good red meat than anything else. So “Fish Fridays” are hard for her and for many of her friends. Last year, at this time, she begrudgingly went along when it was time to go to the grocery store on that first Thursday in Lent. We needed to stock up on her least favorite food item.

Once we arrived, though, a funny thing happened. All our Catholic friends were there in the aisles with the cans of tuna and freezer section where fish sticks are stocked! It was like a Catholic convention. And all fish items were on sale.

“Hey, what are you fixing for dinner tomorrow—tuna noodle casserole?” I asked a mother who has three boys. “Oh, really? You’re making meatless spaghetti. No fish? Good idea.”

No Red Meat During Lent?!

Meanwhile the kids were having a reunion of their own. One of Brigit’s friends was saying, “I hate Fish Fridays. I can’t possibly survive another year of this!!” Brigit started to agree. After all, she had already told me she can’t survive longer than five hours without roast, steak, hamburger or corned beef.

But instead I overheard her saying,

“Jesus went without food for forty days to prepare himself to die for us. I guess it’s a small thing to give up meat.”

After that, she joined me picking out salmon and tuna, while waving and chatting with everyone who was there for the same reason. The grocery store had turned into our Church Extension Office! It was a joyful gathering!

Around the dinner table last night we talked about the early Christians who displayed the fish as a symbol designating safe Christian homes.

In the years when the early Church was widely persecuted, the fish was an important symbol for people who didn’t read or write. According to tradition, if two people met on the road and wondered if it was safe to talk about Jesus, one of the two would draw an arc in the dirt. If the other person finished the arc creating a fish symbol, both people knew, “This is someone I can trust. This is a Christian.”

It’s a rich symbol with layers of meaning. I asked my son, “Did you know the word for fish in Greek is Ichthus? And the Greek letters for this word are an acronym for: Jesus Christ, God’s Son, Savior?” Our faith, all in one little drawing. Pretty interesting, huh?

Most of the Apostles were fishermen. Jesus fed the 5000 with a miraculous multiplication of fish and bread. Then Jesus told the Apostles he would make them “fishers of men.” The fish represents life in the spirit; it signifies the sustenance that comes from Jesus.

So our family is now making stuffed felt fish to hang in our windows. They are filled with great smelling potpourri. For us, this is our way of saying, “Fish Fridays are sweet. Because they give us an opportunity to tell stories about the wondrous gift of life with Jesus.”

Won’t you join us in displaying and celebrating the fish symbol?

And don’t forget the Church Extension Office…it’s coming soon to a grocery store near you!!