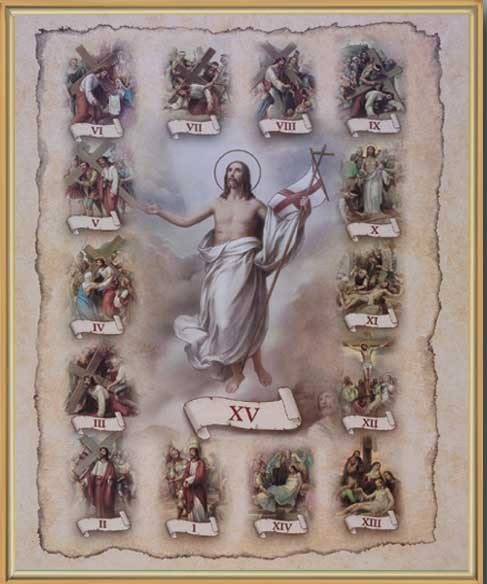 Stations of the Cross

The Stations of the Cross, also known as the Way of the Cross, Via Crucis, and Via Dolorosa (Latin for Way of Sorrows), is a devotion that reflects on Jesus’ final days on Earth—from being condemned to death to dying on the cross and being placed in the tomb. The Stations of the Cross consist of a series of 14 artistic renderings that typically line the interior walls of every Catholic Church. These illustrations capture key moments during Jesus’ journey to His death on Good Friday. It’s often said that you must walk a mile in someone’s shoes to understand what they are going through. The goal of this devotion is to “walk” in Jesus’ shoes by praying and meditating on each of the events (stations) that Jesus experienced.

History of the Stations of the Cross

The history of the Stations of the Cross dates back to the 4th century when Christians were allowed to legally practice their faith in the Roman Empire after 250 years of persecution. In 335 AD, Emperor Constantine built the Church of the Holy Sepulcher at what is believed to be Jesus’ burial site. Soon after, worshippers began taking pilgrimages to the Holy Land and to the church on Good Fridays to retrace the final journey of Jesus.

Pilgrims developed stops along the way to Calvary to note specific events that took place (Jesus falls the first time; Jesus meets the women of Jerusalem, etc.) Pilgrims could only guess where some of the incidents took place because Jerusalem had been almost completely destroyed by Roman armies in 70 AD.

The practice of incorporating artistic renderings of the Stations of the Cross in churches didn’t begin until around 1686, when Pope Innocent XI allowed Franciscan friars to adorn their churches with the different stations. In 1731, Pope Clement XII allowed all churches to have stations and to practice this devotion.

The Stations of the Cross are typically practiced on Fridays during the Lenten season, but can be performed any time of year at home.

What Do We Get From Praying the Stations of the Cross?

They involve us in the story

“How many people were with Jesus on the way to Calvary: Pilate, Simon of Cyrene, Mary, the women? Sometimes we can be like Pilate, who did not have the courage to go against the tide to save Jesus’ life, and instead washed his hands…The Cross of Christ teaches us to be like Simon of Cyrene, who helped Jesus to carry that heavy wood; it teaches us to be like Mary and the other women, who were not afraid to accompany Jesus. Who are you like? Like Pilate? Like Simon? Like Mary?”

They allow us to place our trust in Him

“The Cross of Christ contains all the love of God, His immeasurable mercy. This is a love in which we can place all our trust, in which we can believe…let us bring to Christ’s Cross our joys, our sufferings and our failures. There we will find a Heart that is open to us and understands us, forgives us, loves us, and calls us to bear this love in our lives, to love each person, each brother and sister, with the same love."

They remind us God triumphs over all evil

“With Him, evil, suffering, and death do not have the last word, because He gives us hope and life: He has transformed the Cross from an instrument of hate, defeat, and death into a sign of love, victory, and life.”

They show us how much God loves us

“It (the Cross) gives us a treasure that no one else can give: the certainty of the unshakable love which God has for us. A love so great that it enters into our sin and forgives it, enters into our suffering and gives us the strength to bear it.” St. Paul put it best in his letter to the Romans, “you might sacrifice your life for someone who was good or just. Yet, Christ sacrificed His life while we were sinners for our salvation.” (Romans 5:7-8)

Jesus led by example and the Stations of the Cross are one of the great many tools for living Jesus leaves for us. By meditating on each of the stations we increase both our sorrow for our sins against God and our need for His help in bearing our own crosses. When we meditate on the Stations of the Cross, we can learn the true meaning of love, perseverance, obedience, humility, and patience.

Stations of the Cross

Consider how Pilate condemned the innocent Jesus to death, and how my Redeemer submitted to this sentence, to free me from the sentence of everlasting death. 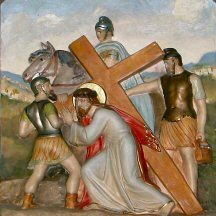 Consider how Jesus took the cross upon His shoulders, which my many sins made so heavy. 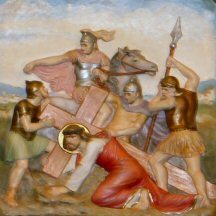 Consider how Jesus, overcome by weariness and pain, fell to the ground under the weight of the cross. 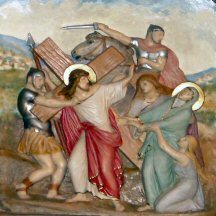 Consider the anguish which filled the hearts of Jesus and Mary at this sorrowful meeting. It is my sin which caused the Son and the Mother of this pain. 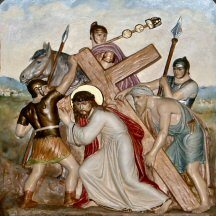 Consider how His enemies, seeing that he was no longer able to drag his cross, compelled Simon of Cyrene to carry it after him. 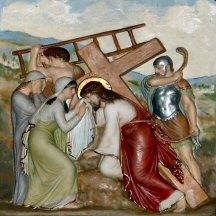 Consider how this woman tried to lessen the sufferings of Jesus, and how he rewarded her by leaving the print of his Sacred face on the towel she had in her hands. 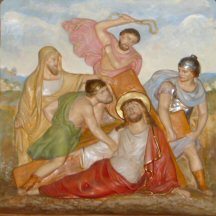 Consider the sufferings Jesus endures in this second fall. I have been the cause of them, by my frequent relapses into sin. 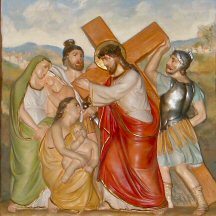 Consider how Jesus exhorts these women to weep, not for Him but for themselves; teach me to weep more for my sins than for His sufferings. 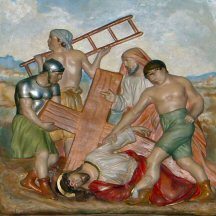 Consider how Jesus falls the third time, enduring excruciating pain, to atone for my obstinacy in continually committing new sins.

Station 10: Jesus is stripped of his clothing. 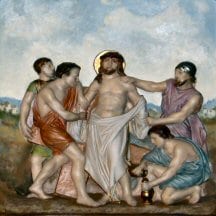 Consider the shame Jesus endured in being stripped of his garments, and the bitterness of the wine mixed with myrrh and gall, which they caused Him to drink. In this He atone for my immodesty and my intemperance in eating and drinking.

Station 11: Jesus is nailed to the cross. 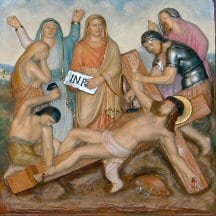 Consider the dreadful suffering Jesus endured, when His enemies stretched His bleeding body and fastened it to the cross with nails through His sacred hands and feet. 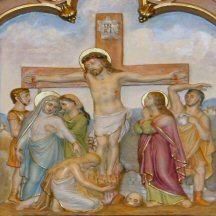 Consider how Jesus, after three hours of agony, dies on the cross for my salvation.

Station 13: Jesus is taken down from the cross. 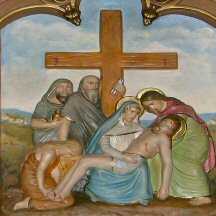 Consider the grief of the Mother of God when she received in her arms the body of her divine son, all pale, covered with blood, and void of life.

Station 14: Jesus is laid in the tomb. 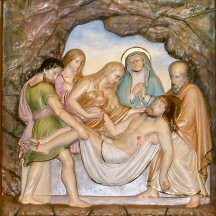 Consider how the most sacred body of Jesus was laid, with the greatest reverence, in the new grave prepared for it.