St. Joseph of Cupertino – From “Brother Ass” to Holy Priest 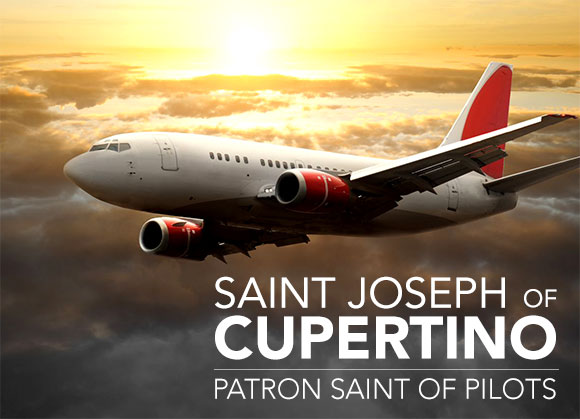 It seems rather harsh, but St. Joseph of Cupertino—the man canonized a saint in 1767—was once referred to by his Franciscan brothers as “Brother Ass.”

Before St. Joseph of Cupertino became a saint, he had a long track record of failing in life. In many biographical accounts he’s described as being awkward, dull, and “failing at school, maintaining a conversation, or taking care of a house… He wasn’t even capable of touching a dish without breaking it.” St. Joseph spent his teen years trying to fit in and finding his purpose in life. 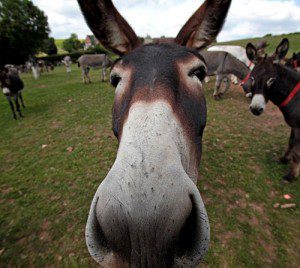 When he was 17, Joseph attempted to join a monastery with great difficulty. Eventually, in his early twenties, he was admitted into a Franciscan friary near Cupertino. However, the most that the Franciscans would do was to give him the habit of the Third Order and appoint him in charge of the stable. One of his jobs was looking after the monastery mule, earning him the nickname “Brother Ass.” So how did the man born Giuseppe Maria Desa go from being called “Brother Ass” to St. Joseph of Cupertino? Let’s take a look at his story of determination and hope.

St. Joseph of Cupertino was born June 17, 1603, in Cupertino, Apulia, Italy. His father, a carpenter, died before St. Joseph was born, leaving his mother in deep debt. St. Joseph’s mother was so poor, she lost ownership of her house and was forced to give birth to her son in a stable. Throughout his childhood, St. Joseph was underfed, weak, and constantly ill. Faced with so many hardships, his mother soon became bitter with her lot in life and even began to resent her son. St. Joseph’s life of being rejected by people started with his own mother. When he was seven years old, he developed a severe ulcer that wouldn’t heal, and his mother feared he would be a lifelong burden.

Deemed a failure in school, St. Joseph’s school mates would tease him for always daydreaming and nicknamed him “The Gaper” since he often just stared into space. He was so absent-minded, he’d even forget to eat and when it was brought to his attention, he’d say “I forgot.” St. Joseph learned to accept his shortcomings in life, yet never stopped searching for a place to fit in and to belong.

Since continuing with school wasn’t a viable option, he attempted to be an apprentice for a shoemaker, but he failed at that, too.

St. Joseph Tries To Join a Monastery—Without Much Success

By the age of 17, St. Joseph encountered a friar and decided perhaps he should dedicate his life to his faith.

By the age of 17, St. Joseph encountered a friar and decided perhaps he should dedicate his life to his faith. Without much education and the skills to become a friar, St. Joseph found it difficult to find a monastery willing to accept him. Finally, he found a monastery willing to give him a try—on a trial basis. Soon, however, his superiors became frustrated with his clumsiness, difficulty to learn, and bad temper. Mostly, they were exasperated with his moments of distraction, where he would stop whatever he was doing, often falling to his knees, and just be still in silent reflection. It didn’t matter what he was doing, he could be washing dishes or carrying food on a tray and he would just drop everything—literally—and go into a trance-like state. Ultimately, St. Joseph was stripped of his habit and dismissed from the monastery. St. Joseph described that moment as the lowest point in his life. He often said that when “they deprived him of the habit it was as if they had torn off his skin.”

What Was Next For St. Joseph?

With nowhere to live and no future plans, St. Joseph wandered the streets contemplating his life. As fate would have it, not only did he have no place to live, he was left with no shoes, hat, and torn clothing after being attacked by dogs. As he traveled, he came across a shepherd and a nobleman who believed him to be a thief or criminal based on his appearance and treated him as such.

In desperation, St Joseph decided to seek help from an uncle who was a prosperous tradesman. He hoped he could work for him and set his life on the right path. Seeing his nephew in such a downtrodden state, the uncle concluded that he would amount to nothing and refused him. His last hope was his mother. Unfortunately, time didn’t soften her heart and upon seeing him said, “You have brought shame upon us all. You are good for nothing. We have nothing for you here. Go away; go to prison, go to sea, go anywhere; if you stay here there is nothing for you but to starve.” 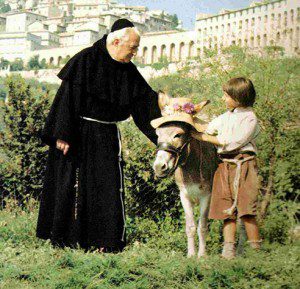 St. Joseph’s mother begged her brother—a Franciscan friar—to take her son back to the Order as long as she didn’t have to worry about him. The most they could offer was to give him the habit of the Third Order, and employ him as a servant. He was appointed to the stable, as the keeper of the monastery mule where he was referred to as “Brother Mule” and “Brother Ass.” Resolved that he would never be a friar, St. Joseph was content with his role as servant. He happily slept in the stable, never complained and did all that was asked of him. After all, he finally had a place where he belonged. St. Joseph was soon filled with merriment and laughter and became penitent. Just seeing the sunrise would bring a smile to his face. He mingled with the poor and soon his kindness and simplicity was noticed by the friars. They decided to give him another chance to become a part of the Order and to allow him to study for the priesthood.

Studying remained difficult for St. Joseph and while he couldn’t remember all that he was taught, he could always recite and comment at great length about the meaning of the Scripture verse, “Beatus venter qui Te portavit” (“Blessed is the mother who gave you birth and nursed you.”) Luke 11:27. When it was time for his diaconate examination, the Bishop chosen to administer the test, pointed to a Scripture verse at random and asked St. Joseph to discuss it. Fortunately for him, the passage was the one he knew so well—”Beatus venter qui Te portavit.” He passed.

A year later it was time for his priesthood tests. While all the other candidates studied and were prepared, St. Joseph wasn’t. The Bishop began testing a number of candidates, all who responded perfectly. Assuming that all the candidates shared the same knowledge, the Bishop approved all of them without questioning the rest (including St. Joseph). St. Joseph was ordained in 1628.

Even after becoming a friar and priest, St. Joseph remained humble. He realized he wasn’t as qualified as the other priests and didn’t take his position for granted. He dutifully continued acting as a servant, cleaning and tending to the other priests, and would often ask, “What else can Brother Ass do?” 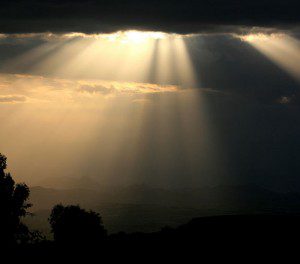 It was at this stage in his life (especially during prayer) that something almost mystic-like happened: Friar Joseph began experiencing God’s profound presence in everything he saw. He would have an overwhelming feeling of awe that would take over him and he would see God in nature and everything surrounding him. He would stand and stare in silence and reverence, in total oblivion to whatever was happening around him. It was later learned that Friar Joseph was experiencing these visions ever since he was a child.

What was once thought to be absent-mindedness and distraction was actually his special gift of being able to see God in his surroundings. As time went on, Friar Joseph’s visions became more frequent and stronger, so much so that he would levitate off the ground and float through the air. If he was in church, he would suddenly float towards the altar or towards a religious shrine. His ability to fly continued, especially whenever he heard the names of Jesus or Mary, the singing of hymns during the feast of St. Francis, or while praying at Mass.

St. Joseph Is Under Suspicion

As can be imagined, St. Joseph gained quite the following with people flocking from all over to see “The Flying Saint,” as he became known. As popular as he was, some were suspicious of his abilities. A jealous clergy member reported him anonymously to the Holy Office, accusing him of going around trying to imitate the Messiah. St. Joseph was soon investigated by the Inquisition Tribunal. 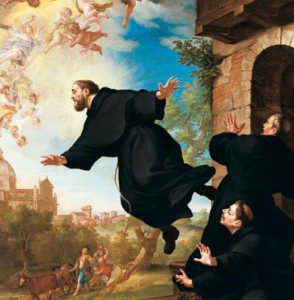 To the amazement of the tribunal judges, St. Joseph began levitating during his interrogations. The judges watched in awe and while they didn’t have the courage to condemn him, St. Joseph was always under suspicion. In an attempt to curtail his popularity, the judges sent him into forced seclusion. Yet, to the dismay of the tribunal, his followers always were always able to find him. Friar Joseph was repeatedly shuffled around, even exiled and banned from speaking to anyone even his fellow friars. Six years before his death, he was finally allowed to return to his Franciscan order, and lived his remaining years in quiet reflection in a friary in Osimo, in the province of Ancona.

Even though his later years were plagued by sadness and the same rejection he first felt as a child, he endured his ordeal with immense patience. Friar Joseph was heard saying with confidence right before he died, “Praised be God! Blessed be God! May the holy will of God be done!” Those who loved him even witnessed the laughter and merriment that once filled his face long ago return once again; he died on September 18, 1663.

The feast of St. Joseph of Cupertino is celebrated September 18. He is the patron saint of aviators, astronauts, flying, test takers, and weak students.