Feast of the Assumption of Mary, August 15th 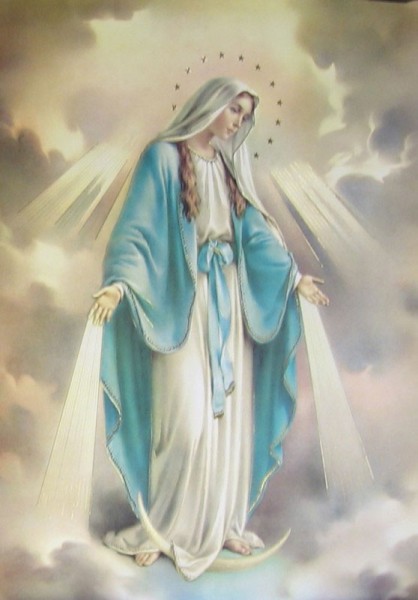 Feast of the Assumption of Mary. August 15th.

A Holy Day of Obligation

Imagine being one of those in the early Church. You know Mary, the Mother of Our Lord because she goes from table to table at dinner; quietly ministering to everyone…she radiates such a deep strength that simply seeing her face inspires peace. It is quite humbling to realize that so many who loved Jesus ran away during the crucifixion, but she, who was the closest of all to Him, stayed and prayed. She remained strong through it all by trusting in God in the darkest hour.

Since the Resurrection and the Descent of the Holy Spirit, she has acted us as a mother and comforter to all the newcomers who flock to the young Church every day.

Now, she has died. Such grief surges throughout the community in Jerusalem and beyond. Her body is laid in a tomb…it’s a cave, really, up on the mountain and large stones cover the entrance. The next day, we must go to anoint her and pray.

But wonder of wonders–her body is gone!!! The cave is filled with a bright light. We rush to tell the others…our Blessed Mother has been taken up to Heaven. She is gone. There was no decay allowed. Her body and soul were lifted up by God!

According to the earliest of records, this is roughly the experience of the early Church, though the story was recorded later.

It is an ancient memory of Mary which became known as “The Assumption” and it is so important that it was identified as a Holy Day of Obligation by Pope Pius XII in 1950. Yet, why do we have to be “obligated” to attend Mass on such a day as this?  To me, it seems so beautiful and important that surely we will all “desire” to come and celebrate!

Just as Easter reminds us of the promise of everlasting life; the Assumption reminds us of God’s Eternal Love! Death is not to be feared.  Jesus gave us His Mother while He was on the cross. But that was not the end of her story. She was taken up to Heaven immediately after death to be crowned Queen of Heaven and Earth. How wonderful is that?

This gives me hope and comfort especially now…During this summer, when other people have been enjoying sun, surf and travel, our Church community has been dealing with sudden deaths. Two people died unexpectedly in car accidents. Then our neighbor died after struggling for two years. Meanwhile, my husband was in and out of the hospital…very ill. An elderly neighbor and friend has left us her dog and moved to the “big city” so she would be closer to doctors and family.

It’s as if dark clouds have gathered over our little town out here on the eastern side of New Mexico’s big mountains.  And summer is disappearing way too fast. There is little time left for our family to experience some relief from stress.

In Peter Kreeft’s book about Heaven, he says we worry about “not enough time” for two reasons: 1) For those who are afraid of death–time is a reminder that our life on earth has an end point, so it seems that living has to be hurriedly squeezed into the few years we have. 2) But for those who celebrate the glory of the Resurrection and the Assumption, time is like packing for a big journey! “Soon and very soon,” the song says, “We are going to see the King.”

It’s a wonderful thought to know that our Mother is already there in heaven. The door is open and she’s standing there waiting. She is singing. There is light. Her arms are stretched out to welcome our friends who have died.

This year, let’s make the feast of The Assumption a “Desire Day”—A time to go to Mass joyfully so that we receive our Mother’s special blessing as we remember her entrance into immortality!